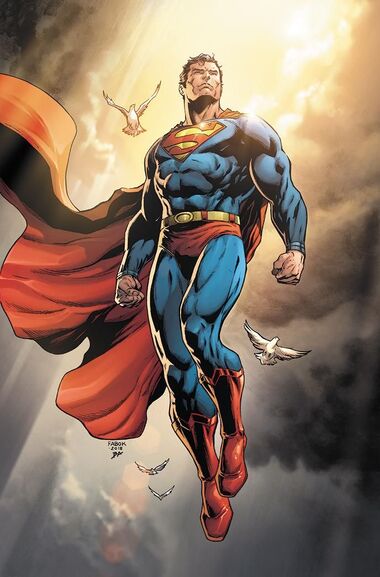 Superman, also known as Clark Kent and Kal-El, is a Kryptonian superhero. Though born of the planet Krypton, he was sent away in a spaceship as a baby to save him from his home planet's destruction. His spaceship landed on Earth in Smallville, Kansas where he was found and adopted by Jonathan and Martha Kent. Raised to a high moral standard, Superman uses his powers to protect innocents and safeguard his adopted home. He is husband to Lois Lane and the father of Superboy.

This version of Superman is unique, being a combination of two versions of the character, sharing most of their memories and history.

Superhuman Physical Characteristics, Genius Intelligence, Stellar Radiation Absorption and Empowerment, Acrobatics (Can leap tall buildings and was shown to be highly agile), Flight, Enhanced Senses (Super Vision, Hearing, Smell, Touch and Taste. He can focus up to a sub-atomic and molecular level or widen to a planetary scale. Can hears across the planet and can identify heartbeats), Information Analysis (Can quickly analyze molecular and genetic information, electromagnetic makeups. Able to make quick calculations of his opponent and the environment), Heat Manipulation, Limited Radiation Manipulation and Limited Matter Manipulation via Heat Vision (His heat vision can match absolute zero, emit precise doses of microwaves to kill organic Nano-Machines, replace the effects of the sun, and agitate molecules to cause structures to shatter), Durability Negation (His heat vision works on a microscopic level), Non-Physical Interaction (His heat vision can hit intangible beings and counter molecular phasing), Limited Power Nullification (He can cut off external sources of power using heat vision), Self-Sustenance (Types 1 and 2), Super Breath and Ice Breath, Limited Intangibility and Invisibility (Can become intangible and turn invisibile via phasing), Afterimage Creation, Illusion Creation (Torquasm Vo can create illusions to provide a distraction), Aura (Generates a constant aura around himself to protect his clothes and avoid grime), Martial Arts and Pressure Point Strikes, Limited Sound Manipulation (Destroyed an illusion by shouting, should be able to replicate Supergirl's sonic scream), Limited Air Manipulation (Can generate and cancel tornadoes; Can draw air out of an area by creating updrafts), Purification (Type 3; Can utilise the life-force of the universe to cleanse and purify the form and spirit when using Torquasm-Rao and Torquasm-Vo), BFR (Utilised counter-vibrations to send a Phantom Planet outside the universe), Limited Electricity Manipulation (Can generate enormous amounts of static electricity), Limited Vibration Manipulation (Can thunderclap), Limited Empathic Manipulation (Calmed a creature down with a touch), Astral Projection (He taught it to his wife Lois), Regeneration (Mid; Comparable to General Zod, who was able to do this), Body Control (Can control autonomous body functions, allowing him to fool sensors), Absorption of Electromagnetic Energy (Absorbed energy from an EM gun; Getting shocked recharged his strength), Geothermal Energy (Learned to leech power from the earth around him), and other types of Energy, Energy Manipulation (He is also capable of converting biological energy into Solar Radiation), Limited Space-Time Manipulation (Capable of opening and closing holes in the fabric of spacetime), Capable with alien technology, Statistics Amplification (Can temporarily increase his powers by immersing himself within a yellow star. Under a blue sun his powers are boosted and he gains the ability to imbue others with his powers), Weapon Mastery (Proficient with weapons such swords and guns)

Attack Potency: Solar System level (Evenly fought against Orion's Post-Flashpoint Avatar and gave him more trouble than blasts from Mogo did.) | Solar System level (Should be at least as powerful as his New 52 self. With most of the history of his Post-Crisis self restored, he should be capable of similar levels of power). Multiverse level+ after an unknown number of sun dips (Destroyed the World Forger's masterpiece, his new multiverse, which was intended to replace the local Multiverse of 52 universes, and also knocking out The World Forger himself, leaving him on the ground, coughing and with a bloody black eye [1]).

Speed: Unknown. At least FTL movement speed. Massively FTL+ flight speed (Seemingly flew from Pluto's orbit to Earth in seconds. [2] Flew from the edge of the universe to Earth in 2 months[3]) | Massively FTL+ (Comparable to his Post-Crisis incarnation), faster after an unknown number of sun dips (Moved faster than he ever had before)

Lifting Strength: Class Y (Bench-pressed the mass of the earth for 5 days continuously while cut off from yellow sunlight and shedding only a single drop of sweat in the process[4]) | Stellar (Comparable to his Post-Crisis incarnation). Unknown after an unknown number of sun dips

Stamina: Extremely high (bench-pressing the mass of the earth for 5 days continuously in absence of sunlight made him sweat only a few drops) | Extremely High (Capable of engaging in constant physical activity and protracted battles as long as his solar reserves hold out)

Intelligence: Extraordinary Genius. He has shown incredible intelligence and computational abilities, seen reading a library of medical texts equivalent to 10 years of medical training in 5 minutes, assembling a mass of data into an image in less than a minute when it would take a supercomputer years[5], and formulating the unified field equation. Superman's mind works sharply and with extreme speed relative to humans. Depicted to be an expert in various alien technologies (he can invent and build new things with Kryptonian technology rather easily) and multilingual. Good leadership skills and a decent amount of battle experience | Extraordinary Genius, based on having most, if not all, of his memories and experiences from Post-Crisis on top of his experiences after Flashpoint

Weaknesses: Kryptonite (various varieties), he is entirely dependent on the Stellar Radiation of a Yellow Star to sustain his powers (if he's deprived of Sunlight, he slowly loses his powers), the Stellar Radiation of a red star (weakens him due to red Stellar Radiation having less energy than that of a yellow or blue star), Magic (susceptible to it instead of weak against it, since he resisted a magical blast which could destroy a planet to some extent), he cannot see through lead, and is left as vulnerable as a regular human after using Super Flare for 24 hours before being able to use his powers again