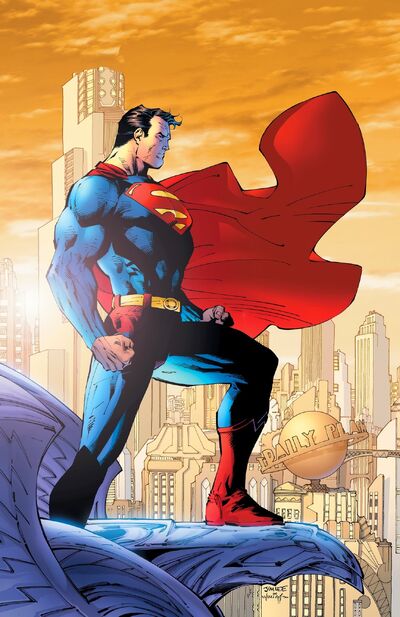 Superman is one of the most powerful beings on Earth and its greatest hero. Born to the illustrious House of El, Kal-El is one of the last surviving members of his race as his planet was destroyed not long after his birth. He was found and raised by Jonathan and Martha Kent in Smallville, Kansas. Raised with high moral ideals, he uses his incredible strength, speed, flight and various other superpowers to fight evil and protect the innocent as a symbol of heroism and justice. In his civilian identity he is Clark Kent, a mild-mannered reporter working for the Daily Planet in Metropolis. Superman is also a founding member of the Justice League of America and a charter member of the Legion of Super-Heroes in the 30th Century.

Superhuman Physical Characteristics, Genius Intelligence, Stellar Radiation Absorption and Empowerment, Acrobatics (Can leap tall buildings), Flight, Enhanced Senses (Super Vision, Hearing, Smell, Touch and Taste. He can focus up to a sub-atomic and molecular level or widen to a planetary scale. Can hears across the planet and can identify heartbeats), Information Analysis (Can quickly analyze molecular and genetic information and electromagnetic makeups), Heat Manipulation and Limited Matter Manipulation via Heat Vision (His heat vision can match absolute zero, replace the effects of the sun, and agitate molecules to cause structures to shatter), Durability Negation (His heat vision works on a microscopic level, Non-Physical Interaction (His heat vision can hit intangible beings and counter molecular phasing), Limited Power Nullification (He can cut off external sources of power using heat vision), Self-Sustenance (Types 1 and 2), Super Breath and Ice Breath, Limited Intangibility and Invisibility (Can become intangible and turn invisibile via phasing), Afterimage Creation, Illusion Creation (Torquasm Vo can create illusions to provide a distraction), Aura (Generates a constant aura around himself to protect his clothes and avoid grime), Martial Arts and Pressure Point Strikes, Limited Sound Manipulation (Destroyed an illusion by shouting, should be able to replicate Supergirl's sonic scream), Limited Air Manipulation (Can generate and cancel tornadoes; Can draw air out of an area by creating updrafts), Limited Electricity Manipulation (Can generate enormous amounts of static electricity), Limited Vibration Manipulation (Can thunderclap), Calmed a creature down with a touch, Astral Projection (He taught it to his wife Lois), Regeneration (At least Mid-Low), Body Control (Can control autonomous body functions, allowing him to fool sensors), Absorption of Electromagnetic Energy (Absorbed energy from an EM gun; Getting shocked recharged his strength), Geothermal Energy (Learned to leech power from the earth around him), and other types of Energy. He is also capable of converting biological energy into Solar Radiation, Limited Space-Time Manipulation (Capable of opening and closing holes in the fabric of spacetime), Capable with alien technology, Under a blue sun his powers are boosted and he gains the ability to imbue others with his powers, Can temporarily increase his powers by immersing himself within a yellow star

Attack Potency: Solar System level (Can damage characters with his level of durability, such as Doomsday and Cyborg Superman. Threw a compressed solar system away from the Earth [1])

Speed: Massively FTL+ (Comparable to Wonder Woman. Swifter than Green Lanterns, Mon-El, and Karate Kid. Flies from Vega to Earth in a short amount of time.[2] Read through an entire library worth of books in seconds)

Lifting Strength: Stellar (Comparable to Lobo, and Mon-El, who pushed a White Dwarf star to another Solar System. Able to hold a Black Hole and a Solar System.)

Durability: Solar System level (Contained a mini-black hole that was about to destroy the entire solar system.[3] Took attacks from the Void Hound, which had previously destroyed ten star systems during a test-drive.[4] He withstood an explosion at point-blank range equivalent to 50 Keplar Supernovas while severely weakened by red sun radiation. Tanked multiple red solar radiation blasts from a Sun-Eater, which was capable of destroying entire suns and star systems.[5] ​​​​​)

Stamina: Essentially infinite as long as he's under yellow or blue sunlight.

Standard Equipment: In one issue, received a massive power-up widely known as the Cosmic Armor. This is not part of his skill-set though, so it should be specified as included.

Intelligence: Extraordinary Genius (Superman is well-acquainted with highly advanced Kryptonian technology and has used it to build and maintain the Fortress of Solitude, he can process information faster than a supercomputer, and has repeatedly outsmarted Lex Luthor. He is skilled in Torquasm Vo, a Kryptonian martial art. Good deductive and leadership skills. He has massive battle experience with all kinds of powerful beings, and is highly resourceful, with his quick thinking saving countless lives on numerous occasions.)

Weaknesses: Kryptonite (various varieties, all with different effects on him), red stellar radiation (absorbing it instead of yellow stellar radiation will cause him to lose his powers), and magic. He will put himself in harm's way to protect innocents.

-Kryptonian Physiology: Superman's cellular structure is much more dense, resilient, and biologically more effective than human tissue. He does not possess superhuman strength levels despite his enhanced cellular ability without his cellular structure charged with yellow solar energy. Without such charging, his physical capabilities are identical to a human of his height and weight who engages in regular physical activity. As an alien, he possesses several organs whose functions are not yet disclosed or understood but are believed to be part of or the source of his bio-matrix force field and reclamation aura. Superman's body also stores energy actively within his bio-cellular matrix as an energy pattern that is linked to his body's electromagnetic field. This energy powers most of his electromagnetic capabilities such as flight, heat vision and other "sight"-based abilities while supplementing his physical abilities to superhuman levels. 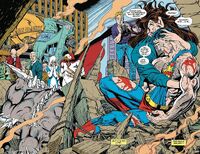 The death of Superman.

Our Worlds at War 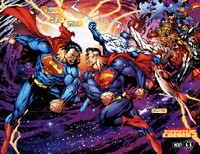 The Evolution of Superman.

Ultron (Marvel Comics) Ultron's Profile (Speed was equalized, Ultron was in his Age of Ultron form)