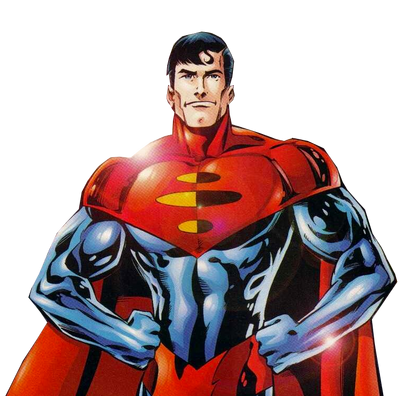 Born Kal Kent, he is the distant descendant of Kal-El of Kyrpton and the latest scion of the Superman Dynasty in the 853rd century. Empowered by the Super-Sun and his mixed alien heritage, he possesses many more abilities than his 21st century primogenitor. A member of the Justice Legion Alpha, he has pledged to use his power to continue the heroic legacy of his forefathers which has spanned millennia.

Speed: Massively FTL+ (He can perceive time in yoctoseconds)

Intelligence: Supergenius. As a 12th level intellect, he should be at least comparable to Brainiac 5 and is capable of sorting through billions of scenarios per second when under the light of the Super-Sun. Even in a weakened state, he can calculate hundreds of scenarios. As a resident of the 853rd century, he utilizes technology vastly superior to that of the 21st century. Even using his time's version of the internet requires processing of information in such quantities and speeds that it overwhelm even Superman.

Weaknesses: His powers fade within days when out of the presence of his local system's "Super-Sun," more quickly if he overtaxes his powers. As his powers weaken and fade, he may spontaneously lose access to various abilities even while they are in use. Prolonged and intensive overexertion in such a state can lead to death via rapid aging and cellular damage due to strain. Despite his highly evolved Kryptonian physiology, he is still vulnerable to Kryptonite.

Start a Discussion Discussions about Superman (One Million)