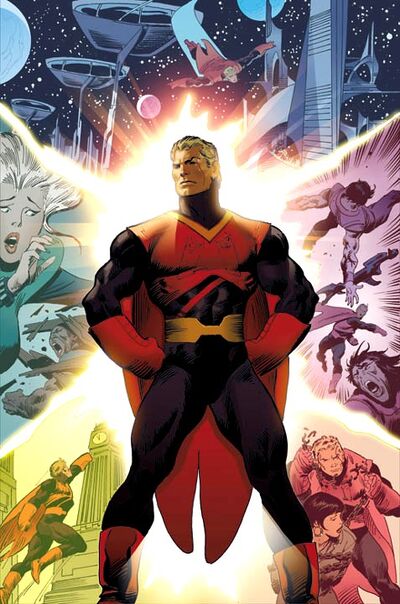 Superman was originally a man named Salden from the planet Krypton, where he served as a member of the Kryptonian police force. One day, he stopped Gorrok, a dangerous criminal from an attack on a teleportation lab. Gorrok was able to easily escape the men escorting him to prison, and took revenge on Salden by killing his fiance. Gorrok then stole an experimental teleportation ship, in an attempt to flee. Salden boarded the ship in pursuit, but it crash-landed, and he was stranded on earth. While on earth, he found that the gravity was hundreds of times less than that of his home planet, making him extraordinarily strong and fast. With his powers, he became the hero known as Superman, and fought to end crime so Earth would be able to work on a spacecraft capable of sending him home.

Age: Unknown (Likely adult as he is widowed)

Speed: Supersonic+ (Flew from Los Angeles to Washington DC in less than an hour. Escaped an explosion)

Lifting Strength: At least Class 5 (Lifted a car above his head. Comparable to Gorrok who swung a large tree casually)

Weaknesses: He only has super strength on Earth due to the gravity being 100 times weaker than Krypton.

Retrieved from "https://vsbattles.fandom.com/wiki/Superman_(Just_Imagine)?oldid=6254621"
Community content is available under CC-BY-SA unless otherwise noted.