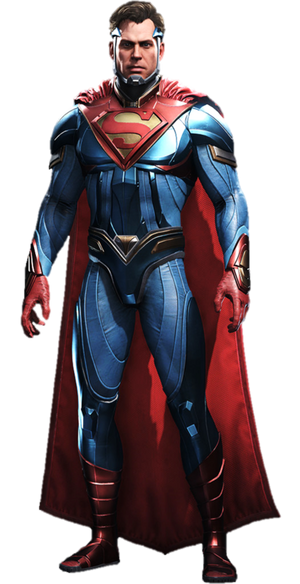 Regime Superman is the main antagonist of the videogame Injustice: Gods Among Us and a secondary antagonist in Injustice 2. He was originally a hero until his wife and unborn child were killed by the Joker, and Metropolis was nuked. In his rage, he killed the Joker. He attempted to bring world peace, but in the process became a ruthless tyrant willing to kill anybody to keep the peace.

Attack Potency: Small Country level (Shook Apokolips when fighting Darkseid and threatened to destroy the planet's core. The former of which would require at least this much power) | Unknown. At least Planet level (Pushed Mogo the Planet into the sun at FTL speeds)

Speed: Massively FTL+ (Is capable of fighting while flying. Quickly flew from Earth to Apokolips. Blitzed every Parademon on Earth) | Massively FTL+

Intelligence: Possibly Extraordinary Genius (He has been shown to use advanced technology much ahead of humanity's with relative ease, and was able to dictate the entire Earth and remain uncontested for 5 years)

Weaknesses: He has become extremely violent and ruthless. He is willing to murder his teammates for mentioning his deceased wife (Main Universe does not possess this weakness). Red Suns are capable of taking away his abilities and various types of Kryptonite are capable of removing his power and causing him immense pain. He is also vulnerable to magical attacks

Kenshiro (Fist of the North Star) Kenshiro's Profile (Base Superman was pit against Seals Lifted Kenshiro, and speeds were equalized)