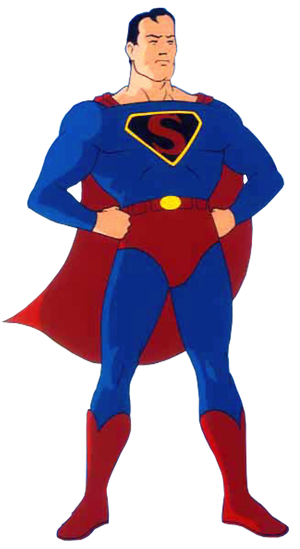 This Superman is the one featured in the seventeen shorts created by Fleischer Studios. The shorts are remembered for their extremely high-quality animation for the time and reasonably accurate adaptation of Golden Age Superman stories (and adding much to the comics' mythos which would become fundamental parts of the character and his world, such as his ability to fly), and served as both an introduction to the character for the general public and a major inspiration for the DC Animated Universe. They have since entered the public domain.

Attack Potency: Likely Multi-City Block Level (Stated to be 'mightier than a roaring hurricane ', which can be this strong .)

Speed: Massively Hypersonic+ (Faster than a streak of lightning., which is this fast .)

Durability: Multi-City Block Level (Able to withstand hitting a comet stronger than him .)

Standard Equipment: His costume, which appears to be quite resistant to damage, allowing him to protect others.

Intelligence: Likely above average; he is a trained reporter and decent at disguise.