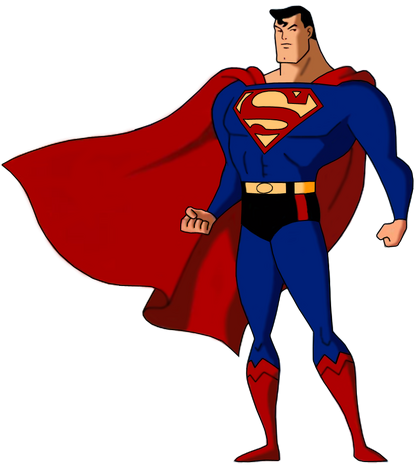 Like his comic counterpart, Superman's true identity is Kal-El, the last surviving Kryptonian. After being taken in by the Kents and (consequently taking the name Clark Kent), he discovered his powers in his teen years when trying to save a young girl from an exploding trailer, he comes to terms with his true identity and later moves to Metropolis as a reporter, in which he gained his moniker after his first escapade. Along with his many solo adventures he is a founding member of the Justice League, forming particularly close relationships with Wonder Woman, Batman, and Martian Manhunter.

Age: Unknown, likely in his early or mid-twenties

Attack Potency: Small City level | Moon level+ (His power should be comparable to his durability)

Speed: Hypersonic+ Flight Speed with Relativistic combat speeds and reactions (Capable of keeping up with and reacting to Flash [when Flash is not going truly all out]. Should be at least comparable to Wonder Woman, whom he has faced and matched in hand to hand combat) | FTL

Durability: Small City level (Survived with no injuries, albeit was knocked out, a concentrated full powered blast from the Second Watch Tower's fusion cannon, which is as powerful as a high yield nuclear warhead. The United States Navy and Project Cadmus developed a Kryptonite lined nuclear warhead specifically to take him out as they were not confident in the ability of their nuclear missiles to take him out) | Moon level+

Stamina: High. He remained conscious against blows that knocked out Wonder Woman and can fight for hours on end without issue.

Intelligence: A straight-A student in school and a quick thinker, Superman is a capable brawler and can quickly hunt down would-be evildoers. However, he lacks the specialized knowledge of his comrades (Flash's connections and forensics know-how, Batman's detective skills and technological mastery, Wonder Woman's combat skills, or Martian Manhunter's or Hawkgirl's knowledge of alien races).

Weaknesses: Kryptonite and Red Sunlight weaken him while Magic bypasses his natural durability; usually holds back to avoid killing his targets

All Might (My Hero Academia) All Might's Profile (Speed is equalised. The fight takes place in BNHA Japan. Low 7-B versions used.)