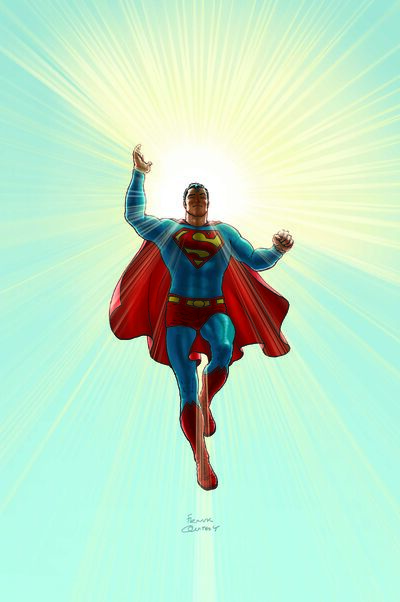 Many years ago, the doomed planet Krypton was destroyed in an unimaginable cosmic conflagration: in a last ditch effort to save their son, desperate scientists Jor-El and Lara Lor-Van placed their son, Kal-El, in an experimental rocket ship, and sent the last hope of their people to the stars. Eventually, the Last Son of Krypton would crash-land on Earth in the Kansas town of Smallville and be found by a kindly couple, farmers Jonathan and Martha Kent, who would raise him as their own son, Clark.

As time went on, and the boy Clark Kent learned the truth of his powers and heritage, he donned an 'action suit' based on the clothing of the lost planet Krypton and would become the hero Superman, defender of all mankind.

His final adventures began when saving Leo Quintum and his workers from a mission to the Sun sabotaged by Luthor; in diving into the sun, Superman's cells were overloaded with yellow solar radiation, which, while temporarily granting him enhanced abilities, would also in time destroy his body from the inside, ultimately killing him. With his remaining days so limited, Superman resolved to prepare the Earth for his passing.

Superhuman Physical Characteristics, Empowerment and Stellar Radiation Absorption, Genius Intelligence, Photographic Memory (Memorized Lois' entire DNA code), Social Influencing (Is a beloved hero admired by billions of people. Luthor was reduced to tears upon experiencing the world through Superman's view), Flight, Regeneration (Mid-Low), Enhanced Senses (Sight, Hearing, and Smell), Information Analysis (Analyzed Lombard's body to see why he was immune to Bizarro's touch), Heat Manipulation via Heat Vision (Seen here), Freeze Breath (Froze a small portion of the Sun with his breath and casually froze a group of inmates), Aura (Has a bio-electric field and can extend it to others), Forcefield Creation (Created a forcefield to block Solaris' attack), Energy Projection (Hurled raw energy at Bizarro), and eventually Transformation, Inorganic Physiology, and possibly Resurrection  (Superman's body is gradually converting into pure energy and this allows him to live even though he already died) and Preparation

Resistance to Fire Manipulation (Unfazed by Bizarro's flame breath), Radiation Manipulation (Has a suit that protects him from Red Solar Radiation. Fully immune to Green Kryptonite), Extreme Cold (Can fly in space unprotected)

Summoning (Commands a group of Superman Robots), Size Manipulation (Has a shrinking ray that was once used by Brainiac), Limited Power Bestowal (Concocted a serum that grants an individual access to Kryptonian powers for 24 hours), BFR (Has a ray that can send people into the Phantom Zone), Limited Life Manipulation (Created life using pure solar energy), Gravity Manipulation (Has a gravity gun that gave an empowered Luthor difficulties)

Attack Potency: At least Continent level (Comparable to Bar El and Lilo who created a large crack on the moon), likely Small Planet level (Stated that he could split a planet in half which would require this much energy)

Speed: Massively FTL+ (Picked flowers from Alpha Centauri while Lois was in the shower, a total distance of 8 light years. Flew to the Sun in seconds.)

Striking Strength: At least Continent Class, likely Small Planet Class (Can create mini suns with a Cosmic Anvil. Struck a planet so hard that it started to retreat back into the Underverse. Damaged Solaris the Tyrant Sun with a punch and defeated Solaris.)

Durability: At least Continent level, likely Small Planet level (Survived a beating from two Kryptonians and was thrown hard enough to crack the moon and back into Earth and only suffered a bloody nose.)

Intelligence: Extraordinary Genius. As a Kryptonian, Superman is capable of processing and storing information far faster than any ordinary human being is able to. Superman has stated that his overexposure to the Sun tripled his intellectual capabilities. He is a skilled scientist and inventor, concocting a serum granting Kryptonian abilities and matching it with a person by analyzing their entire DNA sequence, leaving instructions on how to combined Kryptonian and human strands, coming up with a way to cure any human disease, and inventing a machine that converts thought into sounds and visuals, a suit that protects him from lethal red solar radiation, as well as a time telescope that enables him to speak with descendants many centuries into the future. Superman is also highly resourceful and quick-thinking, as he was able to build a rocket out of scraps with Zibarro in order to escape Bizarro-World. He also possesses high deductive skills, answering the unanswerable question and has massive battle experience with all kinds of powerful beings. Outsmarted Luthor by using a gravity gun to force his metabolism to accelerate, depleting Luthor of his serum. Is destined to complete 12 super challenges, with his final challenge to repair the Sun and build an artificial heart for it.

Weaknesses: Kryptonite (excluding Green), Stellar Radiation of a red star, Magic, X-Ray vision does not work on lead, Superman is slowly dying from an overdose of solar radiation.

Note: Due to lack of panel time and definable feats, everything about the character is a matter of speculation. The only thing known is that his abilities have increased, though by how much is unknown.

Note 2: This version of Superman is immune to Green Kryptonite.

Note 3: Before making any changes to this page, please read and follow the Power-scaling Rules for Marvel and DC Comics. 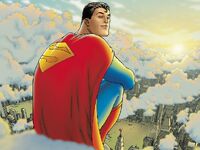 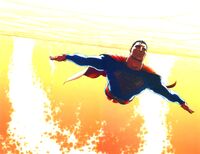 Flying into the Sun

The Prime Superman
meets his past self 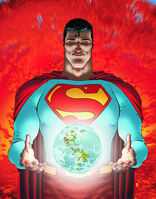 It's never as bad as it seems

A kiss for the ages

Start a Discussion Discussions about Superman (All Star)