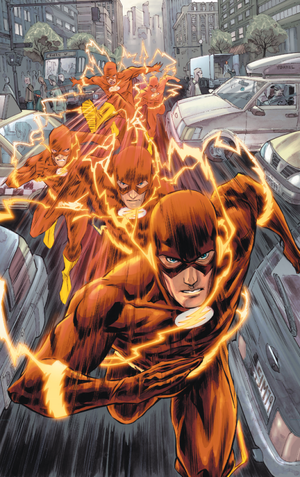 Superhuman speed is the unnatural ability to run, think, and react faster than a normal human.

However, this power is not without any ill effects, as it can strain the body, although users may be resistant or even immune to the effects of high speed travel, including friction, g-force, inertia, etc.

Those with this ability may appear as mere flashes of light, or blurs, to those moving at lesser speeds.

When using this ability, the user's thought processes suddenly speed up, assisting their response time in certain events (i.e. rapid gunfire). As a result of being in this state of mind, people and other happenings move at a much slower rate than normal. Using their speed, some who possess this power may be able to manipulate matter on molecular levels, allowing them to phase in, or out, of solid substances, forms, and even universes.

A person with superhuman speed may be capable of creating tornados, defying gravity, and even sprinting across large bodies of water without falling in. Users of this power may be able to land multiple blows on an opponent within nanoseconds, usually with outstanding force.

One's speed may be determined on whether they are on par with or faster than the speed of light, speed of sound, etc. Some characters move so fast that they appear to be in more than one location than once.

This is not to be confused with Peak Human speed.