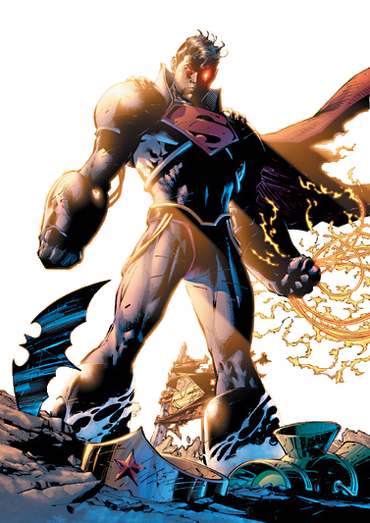 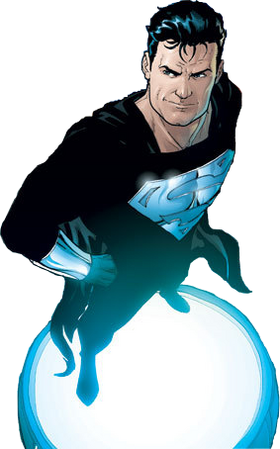 Superboy-Prime is an alternate version of Superman who grew up in a world where superheroes were merely comic books. However, after a freak cosmic storm that led him to meet Earth-One's Superman, Clark's latent Kryptonian powers finally manifested. He then lived out his days as the new Superboy, but after the events of Crisis on Infinite Earths, his lingering feelings about his home world made him increasingly psychotic, eventually going rogue and becoming one of the greatest threats the DC Multiverse has ever known.

Powers and Abilities: Superhuman Physical Characteristics, Heat vision, Super Hearing, X-Ray Vision, Telescopic Vision, Microscopic Vision, Solar Energy Absorption, Regeneration (At least Mid-Low, should be comparable to his Post-Crisis counterpart, who can heal from having his throat slashed), Flight, Ice Breath, Super Breath, He is also able to alter the timelines with his punches (which is likely a result of his future self), Resistance to Magic, Telepathy, Telekinesis, Reality Warping, Anti-Matter (withstood attacks from the Anti-Monitor), Quantum Manipulation (withstood attacks from Monarch), BFR (escaped the Phantom Zone and the Speed Force), and Kryptonite.

Attack Potency: Low Multiverse level (Comparable to a young Pre-Crisis Superman. Fought toe to toe with Ion (Sodam Yat). Affected the entire New Earth's universe with his "retcon punches", while in a weakened state. Fought Monarch, an unrestricted version of Captain Atom, and breached his armor while running out of power. Said armor contained enough quantum energy to destroy the space-time continuum of the universe they were in.) | Multiverse level (Should be as powerful as the original Time Trapper)

Speed: Massively FTL+ (The only way for Bart Allen to beat Prime to the main DCU was for Bart to absorb the entirety of the Speed Force. Dodged and outblitzed Bart, Wally West, and Jay Garrick). | Immeasurable (Is a sentient timeline and exists outside of the flow of linear time)

Durability: Low Multiverse level (Took a beating from a weakened Anti-Monitor even before he possessed his armor. Anti-Monitor at the time was weakened to the point that Earth-2 Superman was able to hurt him. Stated that he was going to survive the Big Bang caused by destroying the planet Oa) | Multiverse level

Stamina: With the Anti-Monitor armor, it's nigh-infinite. Without it, he can tire quickly if he is not under yellow sunlight. (Post-Crisis Superman and Earth-2 Superman nearly defeated him after pushing him through a red star). His stamina was likely greater after absorbing Oan energy. | Infinite

Intelligence: Superboy-Prime achieved a high school-level education, but his increasing psychosis has left him child-like and unstable, often making irrational decisions and coming up with childish retorts and taunts on a regular basis and going on psychotic tantrums whenever he is slighted. However, he is fairly skilled at hand-to-hand combat and has full mastery of his powers, allowing him to overpower most opponents simply by attacking them repeatedly with his overwhelming brute strength.

Weaknesses: He is susceptible to Red Sunlight (though the Anti-Monitor armor negates this weakness). He has an innate fear of the Flashes due to being sealed in the Speed Force for a significant amount of time. Superboy-Prime is dangerously psychotic and insane, and will act irrationally at the slightest provocation. | Unknown

Key: Base and during "Countdown to Final Crisis" | With the Time Trapper's powers

Superboy-Prime originally appeared during the Crisis on Infinite Earths and was portrayed as roughly on par with Superman and other Pre-Crisis Kryptonians, but since he was taken to a pocket dimension outside of the conventional multiverse after battling the Anti-Monitor, his feats, power, and continuity were not rebooted like most other Pre-Crisis characters.

Start a Discussion Discussions about Superboy-Prime