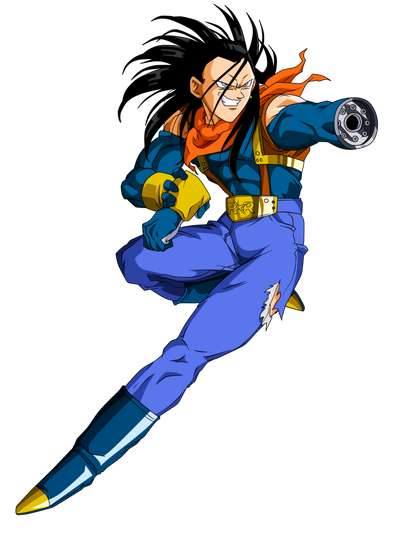 Super 17 is the ultimate Android and Machine Mutant created from the fusion of Android 17 and Hell Fighter 17.

Powers and Abilities: Skilled Martial Artist, Superhuman Physical Characteristics, Acrobatics, Enhanced Senses (His senses are so great that he automatically detects even the slightest changes in the air, notifying him to the appearance of even the stealthiest opponents), Energy Manipulation (Can be used defensively and offensively, to strengthen his skin or to fire ki blasts, which can home in on targets), Danmaku, Self-Sustenance (Types 1, 2, and 3), Shockwaves Generation, Flight, Spaceflight, Energy / Ki Absorption, Afterimage Creation, Forcefield Creation, Can possibly create dimensional rifts and destroy space-time and pocket dimensions with his energy via powerscaling, Portal Creation (Hell Fighter 17 created a portal to travel between Hell and Earth), Telekinesis, Telepathy, Longevity, Resistance to Extreme Cold and Cosmic Radiations

Speed: Massively FTL+ (Far superior to Base Goku, who traversed the afterlife at 4.38 quadrillion times FTL during the Otherworld Tournament Saga) | Massively FTL+

Stamina: Limitless. As an Infinite Energy Model of Android, 17 has access to an unlimited supply of energy.

Intelligence: Super 17 is a cunning opponent, having the combined knowledge skill of Android 17 and his hellish counterpart, who can hold their own against great martial artists such as Piccolo and Vegeta.

Weaknesses: Super 17 is vulnerable to physical attacks while he is absorbing energy.

Android / Machine Mutant Physiology: Super 17 is a fusion of Android 17 and Hell Fighter 17, and is therefore a hybrid of the two, an extremely powerful cybernetic android (or "Artificial Human") instilled with an infinite amount of energy and immense power.