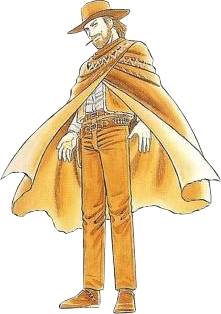 The Sundown Kid, or simply Sundown, is one of the many playable characters in Live-a-live, and the main protagonist in the Wandering chapter. He is the calmest of the main protagonists, perhaps due to his tragic past. Before the events of the Wandering chapter, the Sundown Kid was known all over the west for his duelling skill and lightning-fast gun aim. This led to a gang of criminals raiding his hometown, killing everyone in it and forcing Sundown to roam the desert, alone. He put a bounty on his own head due to the guilt he felt for being helpless against the criminals. However, his chapter gave him a chance to redeem himself, as he teamed up with his old rival Mad Dog to protect a town from O. Dio and his own gang of criminals - the Crazy Bunch.

Age: Unknown, likely in his thirties

Attack Potency: At least Street level, likely Wall level (Fights exclusively with firearms, can harm and kill horses. Defeated O. Dio) | At least Town level (Fought against Pure Odio along with three other heroes, who shook a mountain simply by powering up. Far superior to random enemies that can cause damaging earthquakes, which requires at least Magnitude 6)

Speed: Supersonic (His firearms should be this fast. Can dodge bullets being fired at him) | At least Relativistic (Can tag Odio, who can dodge light-based attacks at point blank from Cube)

Stamina: High (Wandered deserts for days on end, helped townsfolk set up traps for a whole night without rest)

Range: Several dozens of meters with his firearms

Intelligence: The Sundown Kid is well known for being one of the best duellists in the west. He has been challenged many, many times and has likely won all of his duels. With the help of Mad Dog, he is capable of defeating 14 skilled, armed criminals along with O. Dio who wields an incredibly powerful Gatling Gun. He has also been shown to have creative ingenuity, shown when he was able to make deadly traps out of slingshots, frying pans and pictures under a time limit. Should be comparable to other heroes, such as Li Kuugo, who learnt the Xin Shan Quan final technique just by looking at it.

Weaknesses: He tends to spare his opponents, and in-character is unwilling to kill. However, he will kill to protect others.