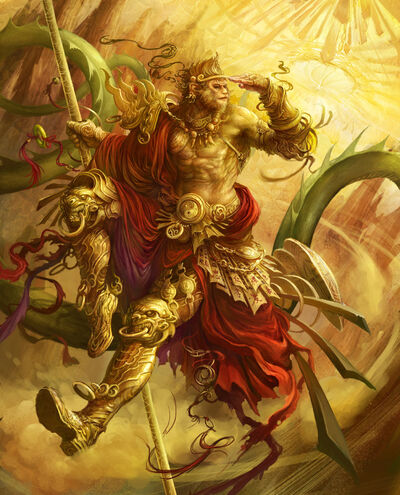 Sun Wukong is a legendary figure of Chinese mythology and one of the most enduring Chinese characters in popular culture, inspiring countless other characters in fiction. A monkey born from stone, he quickly became one of the most infamous and feared tricksters and warriors in Heaven and Earth.

Age: Over 920 Years at the beginning of Journey to the West | Unknown

Attack Potency: At least Island level (Can easily become 20 miles tall, and his Staff grew with him), likely Moon level (Capable of dragging the moon from the skies) | At least Galaxy level (Single-handedly defeated the entire army of Heaven made of 100,000 Deities, which included the embodiments of 28 Constellations. Lifted the Celestial River/The Milky Way Galaxy), likely High Universe level (The Tao Scripture considered the Milky Way to be infinite in size) | Universe level+ (As a Buddha, he is one with all existence), likely Multiverse level (The Buddha is capable of encompassing 10^125 Universes, or crumbling said universes into dust. While immensely inferior, Buddha Wukong should be at least somewhat comparable)

Speed: Sub-Relativistic+ (Capable of crossing 108,000 li, or 21,675 kilometres with one somersault, which would require speeds of about Mach 63192.419825), possibly Infinite Travel Speed (With his Flying Cloud, he flew from the Earth to the Heavens faster than Gods) | Infinite (Crossed the infinite universe in seconds) | Omnipresent

Lifting Strength: At least Class T, possibly far higher (Capable of lifting multiple mountains that represent large portions of the world or universe in Hinduism and Buddhism, however they seem to be treated as regular mountains within the story.) | At least Galactic, likely Infinite | Immeasurable

Intelligence: Quite High. A master of virtually all forms of martial arts. Trained under the supreme Taoist sage Subodhi for 20 years

Weaknesses: Sun Wukong often fools around and rarely takes his opponents seriously. Can be sealed by High-Ranking deities such as Guan Yin

Note: Due to the story's basis in a centuries old oral tale, Sun Wukong’s abilities are presented inconsistently throughout his stories. This profile aims to use his best showings in each key.

Sun Wukong battles with the entire army of Heaven

The Journey to the West
Add a photo to this gallery