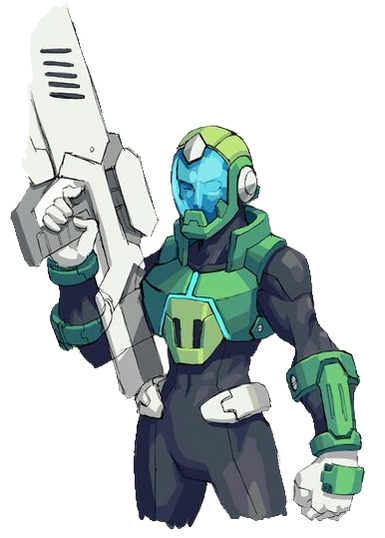 Name: Varies depending on the individual.

Gender: Likely varies. Most seem to have a male body type and voice

Speed: Likely Athletic Human with possibly Sub-Relativistic reactions (Most Sumeragi soldiers are able to react to Gunvolt's Darts. Assassins are able to deflect the darts outright, even when they're rapid-fire. While much slower, their projectiles can still compare to Gunvolt's darts. Psi-Users may be comparable to Nova)

Striking Strength: Street Class | Likely Wall Class (Assassins should be able to damage the same things that can survive blasters with their katanas)

Durability: Street level, possibly Wall level (Should be far more durable than Rei, especially with their armor. Able to survive shots from Gunvolt's darts. A Grenadier's shields take no damage from them while Assassins are able to deflect them outright. Their armor should offer some level of protection against their standard blasters)

Standard Equipment: A blaster rifle | A flamethrower | A shield and several grenades | A rocket launcher | A katana | None notable

Intelligence: Likely above average in combat

Weaknesses: Some can easily be intimidated by enemies much more powerful than them. A Fire Gunner's fuel tanks can be ignited, killing them in a point-blank explosion. Launchers can accidentally kill other soldiers with their rockets.

A Gunner in the first game

A Fire Gunner in the first game

A Grenadier in the first game

A Launcher in the first game

An Assassin in the first game

A Gunner in Luminous Avenger iX

A Grenadier in Luminous Avenger iX

A Launcher in Luminous Avenger iX

Retrieved from "https://vsbattles.fandom.com/wiki/Sumeragi_Soldiers?oldid=6261507"
Community content is available under CC-BY-SA unless otherwise noted.