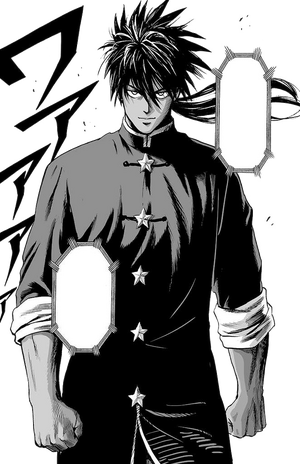 Suiryu (スイリュー, Suiryū) is a Martial Artist and user of the Void Fist. He is said to be a top contender in the Super Fight tournament. Initially, he is shown to be easygoing and laidback, only caring about the prize money for the tournament he was joining. His power and level of skill had also turned him into something akin to Saitama, who is always bored by the lack of challenge he receives from his opponents.

Speed: Massively Hypersonic (Should be superior to early Genos)

Lifting Strength: Class M (Casually lifted half a stadium with his leg)

Weaknesses: Rather arrogant and does not take things very seriously. Due to the boredom he has to face from being so strong, he'll purposely handicap himself to make a fight more interesting. Such as his insistence to only use his legs when fighting Saitama. He can easily be disheartened when facing a much stronger opponent

Void Fist: This style focuses on maximizing damage output while keeping a consistent flow of damage. The martial art revolves around the twisting motion of the body and its parts to maintain or increase the damage of attacks. The style also contains defensive techniques, such as concentrating to harden a body part to withstand an attack from an opponent.

Season 2 render
Add a photo to this gallery

Start a Discussion Discussions about Suiryu (One Punch Man)