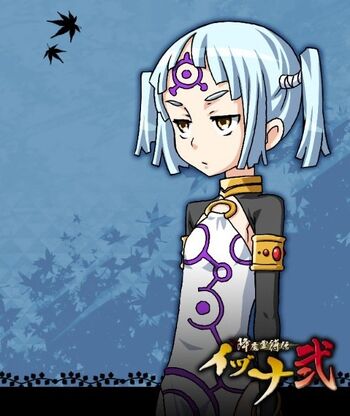 Suiren is a supporting character from Izuna: Legend of the Unemployed Ninja and its sequel. She's the childish Goddess of Water and Peace, who can transform into a mermaid. As the youngest of the 6 Gods, she's by far the least mature of them, is selfish, has a short temper and enjoys playing tricks on others. She really likes Fuuka whom she sees as an older sister figure and somehow gets along with Kagen despite their opposite personalities. She and Izuna get along like cats and dogs.

Tier: At least 7-C, Higher with weapons and some offensive talismans. Some weapons and talismans ignore durability

Attack Potency: At least Town level (Scales to Izuna and Abyss), Higher with weapons and some offensive talismans. Some weapons and talismans ignore durability

Speed: Likely Superhuman running speed, Subsonic+ combat/reaction speed (She can dodge arrows shot from right in front of her by jumping a few meters aside), up to Supersonic with some talismans and weapons (which increase her combat speed by x2 and x3), Faster casting speed/attack speed

Striking Strength: At least Town Class, Higher with weapons and some offensive talismans. Some weapons and talismans ignore durability

Stamina: Vastly Superhuman, likely higher than Izuna due to being a Goddess (She can keep fighting even after getting severely beat up, or having her stamina drained.)

Intelligence: Suiren has good instincts and is capable in combat. She's also a trickster and has no qualm in using underhanded tactics.

Weaknesses: She is quite childish and selfish, and has a short temper. Talismans cost Spirit Points to use (SP) that Suiren has a limit of. Every time she gets hit, she loses 1 SP. The lower her SP gauge is, the weaker her attacks will be (Those aspects are likely exaggerated for gameplay balance purposes).

Key: Base | With weapons | With talismans | With Orbs & Pills

Note: It is possible for a single weapon to have every talisman and weapon ability in the game through repeated use of the Tsukumo talisman.

Retrieved from "https://vsbattles.fandom.com/wiki/Suiren?oldid=6006662"
Community content is available under CC-BY-SA unless otherwise noted.