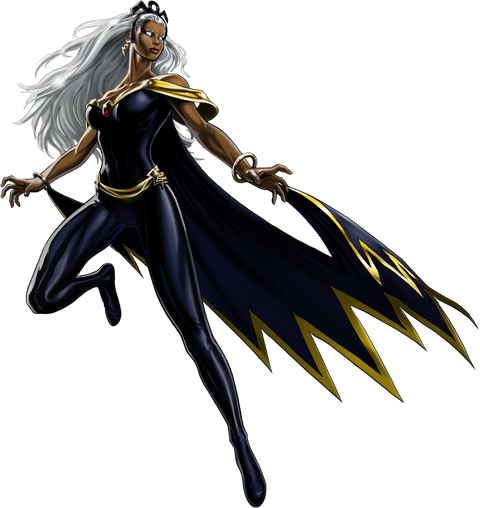 Ororo Munroe, better known as Storm, is a member and sometimes leader of the X-Men, a group of superpowered mutants brought together by Professor Charles Xavier to promote co-existence between humans and mutants and fight crime around the world.

Gifted with the ability to manipulate the weather and its aspects, Storm is among the most powerful of the X-Men. The elemental fury she is able to bring about is only tempered by her incredible empathy and kindness.

Powers and Abilities: Superhuman Physical Characteristics, Enhanced Senses (Is aware of sudden changes in ecology and can read air currents and rain patterns. Can also detect natural phenomenon such as storms, hurricanes, and earthquakes, and has an innate connection to lifeforms all around Earth and potentially the universe), Weather Manipulation, Energy Manipulation, Electricity Manipulation, Flight, Magic (Has great magical potential due to her lineage, but she has never tapped into it), Expert Hand-to-Hand Combatant, Resistance to Telepathy, Mind Manipulation (Her ability to channel and manipulate electricity and her incredible willpower make it difficult for telepaths to break into her mind) and extreme temperatures (Her body reacts accordingly to areas of severe heat and cold)

Durability: Small Building level (She can easily survive elemental extremes, as well as attacks from other mutants)

Standard Equipment: A knife and a staff for necessary occasions

Intelligence: Above Average. Storm has been the leader of the X-Men and thinks of creative ways to use her powers in almost any situation.

Weaknesses: Storm's power is affected by her emotions and her willpower. Overuse of her powers can cause extreme exhaustion. If she becomes enraged, she can cause devastating storms. Also has severe claustrophobia

-Electricity Manipulation: Storm's most common method of offense, she can fire a real, natural lightning bolt from the sky, shoot lightning from her hands, create EMP's, manipulate and perceive electromagnetic fields, screw with a person's bio-electricity and generate electrolysis, allowing her to breathe underwater. She can even use cosmic lightning bolts in space.

-Wind Manipulation: Uses the wind as a powerful attack. Her control over wind is powerful enough that Storm can instantly create large tornadoes and make vacuums that suck away the air. She also uses the wind to make herself fly and increase her physical strength. Her winds even managed to affect the Hulk. She can also use solar winds.

-Flash Flood: Storm can instantly create a flood of water.

-Humidity: Storm can increase the temperature to extremely high degrees.

-Acid Rain: Storm is capable of causing acid rain to fall down on her enemies.

-Hail: Can rain hail down on her enemies.

-Hydrogen Bomb: Storm gathers hydrogen into a particular area and then uses electricity within that area to ignite it, causing a massive explosion.

-Atmospheric Pressure: Storm can affect the pressure of the atmosphere to her will.

-Fog: She can make a fog thick enough to hide herself in. She can make it acid for offensive corrosive purposes.

-Pressure Field: Storm can create a field of pressure around herself and use it as a shield.

-Telepathy Protection: Storm's electrical powers in combination with her will power gives her protection from telepathy.

Storm was capable of wielding a magical duplicate of Thor's mystic Hammer Mjolnir, created by Loki.

Do not attempt to scale Storm to The Adversary, as he was not written as anywhere nearly comparable to his classic power levels at the time of the fight.

Also, that Storm managed to damage X-Man at a time when the latter was capable of creating a separate universe, is considered as an outlier.