For detailed information about the series: see the Steven Universe Wiki. 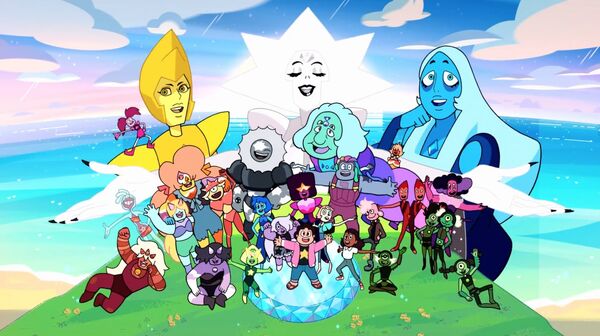 Steven Universe is an animated series created by Rebecca Sugar, who previously worked on Adventure Time. It is a coming of age story that follows the adventures of Steven Universe, who is a half Human, half Gem Stone hybrid. He is the youngest member of the Crystal Gems, a team of magical Gem Stone guardians who protect the Earth.

While the full power of the verse and the gems is yet to be confirmed, Steven Universe is a rather strong verse with several of the characters being Relativistic and having Mountain Level AP. Gems can fuse together to make even more powerful Gems that go higher in the Island Level range (A good example being some of the stronger fusions, like Sugilite and Sardonyx). With Alexandrite and Malachite, as well as the Diamonds themselves, they breach into at least Multi-Continent level territory.

Characters like Lapis Lazuli can control all the water on Earth (when she was weakened via having a cracked gem) and there's even a Fusion Gem monster called "The Cluster" which, according to Peridot, will be much larger than Earth when it takes form, making it easily planet busting through size alone. It also has hax technology like the Glass of Time, which when misused, can create countless other timelines.

Attack The Light/Save The Light