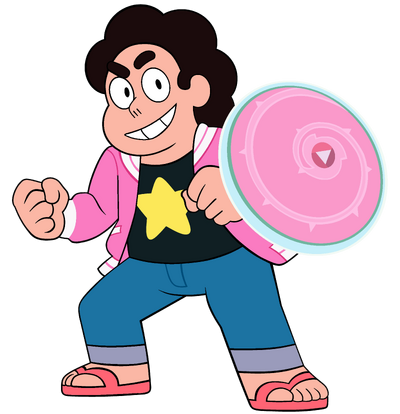 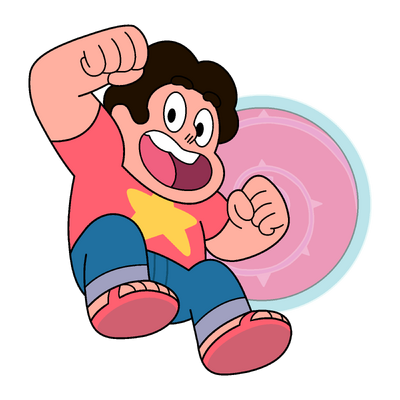 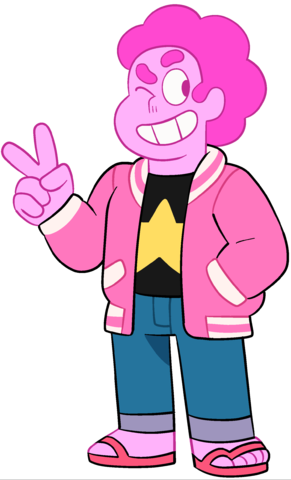 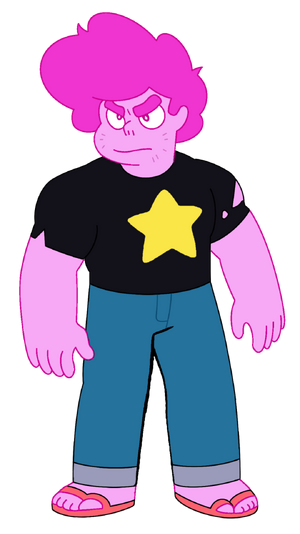 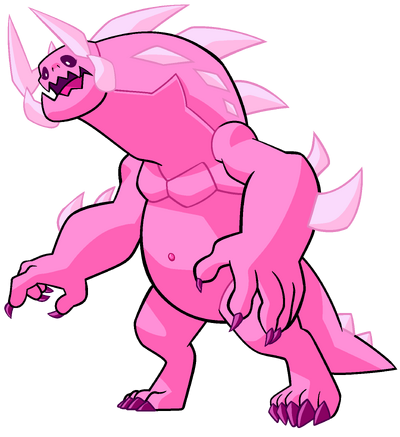 A Half-Human, Half-Gem as a result of his heritage, Steven is an extraordinary unique being with innate powers beyond that of both normal humans and Gems. While only a child, Steven has steadily grown from a tag-along to the Crystal Gems into an equal amongst their ranks thanks to his good-hearted nature and resourcefulness. Though he is a part of a monumental legacy, Steven is devoted to fulfilling his destiny as protector of humanity, just as his mother was before him.

All previous abilities to a greater extent, Dream Manipulation (Can communicate through and manipulate the dreams of people and gems), Possession (Can transfer his consciousness into other beings and people when he sleeps), Mind Manipulation (Can link his mind with that of others), Levitation

All previous abilities to a greater extent, Resurrection (Possesses the ability to resurrect things that have recently died with his tears), Aura (Allows him to enter the astral plane, where he can possess minds and project his thoughts), Sound Manipulation (Can play different songs to provoke different effects), Healing of Status Effects (Via Cure Song), Statistics Amplification (Strength, Durability, Luck), Healing (Via Get Beefy Song and Encouragement), Summoning (Can summon shields around distant allies), Limited Psychometry (This only applies when near areas of great significance to his mother or when fused with someone else)

All previous abilities (Except those unique to Pink Steven) to a greater extent, Life Manipulation (Possesses the ability to make plants regrow), Resistance to Poison Manipulation (Resisted the bio-poison from Spinel's Injector which was able to melt cars and completely necrotize a human's arm instantly)

All previous abilities (Except those unique to Pink Steven) to a far greater extent, Sound Manipulation (Via "screams"), Energy Projection (Waves of pink energy carried by his "screams," causing damage to his surroundings and to people near him. While usually omnidirectional/spherical with him as the epicenter, in Monster Form he can direct these energy-screams at a target, but can also still use omnidirectional screams), Awakened Power (Becomes stronger in response to passionate emotions), Flight (Gains true flight in Pink State), Technology Manipulation (Able to project his subconscious thoughts onto devices such as televisions and phones), Rage Power (Becomes particularly stronger with anger/aggression), Berserk Mode (Monster Steven is the Berserk Mode of Pink State when Steven completely loses control due to self-loathing), Improved Forcefield Creation (Able to create large walls of forcefields, offensive projectile barriers and spiked projectile walls, and large dome forcefields), Resistance to Empathic Manipulation (Resisted Blue Diamond's ability), Resistance to Transmutation and Mind Manipulation when in Berserk Mode/Monster Form (In this state he resisted Yellow Diamond's and White Diamond's abilities), Capable of Large Size via Size Manipulation ranging from Type 0 to Type 2 (He is normally the same size as his Movie/Future key, but can grow up to over 100 meters as seen in his Monster/Berserk Form)

Attack Potency: At least Wall level (Ripped part of an arcade machine apart with his bare hands. Destroyed the dashboard of Greg's van with a punch. Accidentally launched his shield hard enough to nearly cut his television in half). Unknown with Gem powers (The vibrations of his shield destroyed all of Lapis's water clones who had been easily overpowering the Crystal Gems. Accidentally created an army of Watermelons Stevens that were able to overpower the Crystal Gems) | Mountain level (Comparable to Eyeball. Can fight on par with Amethyst when the latter was holding back. Easily dispatched several Holo-Pearls) | At least Mountain level (Should be stronger than before. Forcibly unfazed Topaz, though with significant difficulty and concentration) | At least Multi-Continent level, likely higher (Is the pure gem of Pink Diamond, thus at least comparable to Yellow and Blue Diamond. A single shout is loud enough to break the floor of White Diamond's Warship), likely far higher with Shields (When he deflected White's beams and burst his shield to attack her, the resulting force knocked White briefly unconscious, and Human Steven stated that Pink Steven was "hurting her") | At least Mountain level+ (Capable of fighting against Spinel, Bluebird Azurite, and Jasper). At least Multi-Continent level, likely higher in Pink State (Stomped Bluebird Azurite and Jasper, the latter of which he casually shattered after he stopped holding back. Should be somewhat comparable to but overall weaker than Pink Steven and his Monster Form), likely far higher in Monster Form (When in Monster Form he was able to break out of Lapis Lazuli's water restraints. Stomped Yellow, Blue, and White Diamond as well as Alexandrite and a partially formed state of The Cluster. Monster Steven is not actually Corrupted but just shapeshifted due to Steven's subconscious perception of himself, according to a statement by Garnet and the lack of any need for Diamond Auras to heal him, and was thus simply the full potential of Pink State)

Lifting Strength: Unknown | Class 5 (Was able to lift a full-grown person over his head with little difficulty. Casually lifted a large box of music equipment that normally required two grown men to carry. Lifted a large obsidian statue. Was able to support a large chunk of a stone pillar over his head with his shield) | Class 50 (Helped Rutile and Rhodonite push a rock that weighed this much) | Class Z (Comparable to Yellow and Blue Diamond) | At least Class M (Lifted a massive Gem Injector while in a weakened state). At least Class Z, likely far higher in Pink State and Monster Form (The full potential of this form is stronger than the other Diamonds including White)

Stamina: Unknown | High | High | Limitless | Very High (Performed a Class M lifting feat when his Gemstone was severely weakened and he had just spent nearly the last of its power, then climbed hundreds of meters and took an extended and brutal beating from Spinel in his weakened state while remaining conscious, returning to full strength/health and defeating Spinel upon his Gemstone's powers returning). At least Very High with Pink State (Brutally trained to control Pink State with Jasper for 72 hours nonstop except when sleeping or eating, maintained Pink State for much of the time and took many beatings from Jasper, somehow gained strength during the process instead of tiring, and finally battled and casually stomped Jasper using Pink State while still not tiring. Has never shown signs of fatigue after exiting Pink State no matter how much power/speed he used or for how long--including maintaining the state for hours at a time while repeatedly using several of its abilities--with the exception of very briefly falling unconscious but quickly recovering after reverting from his Monster Form, and that was likely due to psychological shock rather than physical exhaustion as he showed no signs of tiring during his monstrous rampage in which he stomped Alexandrite, Lapis, a partially-formed Cluster, and all three Diamonds)

Intelligence: Above Average. Though never directly stated, Steven is shown to be extremely intelligent in his own right. He is a natural problem solver, as most of his early adventures relied on him using intelligence and creativity to get himself out of trouble without the use of his powers. He is also able to converse with the highly intelligent Connie on an equal footing since they first met. Despite him being naive and socially oblivious, in the graphic novel "Too Cool for School", Pearl mentioned how Steven's education in the care of the gems was much greater than Earth schools, and Steven was getting perfect marks on his tests. As of Future Steven underwent additional combat training under Jasper, teaching him a more offensive combat style to contrast his normally defensive style. However, when transformed into Monster Steven his intelligence is reduced at least to Below Average, likely Animalistic, as he is bestial and mostly incapable of logic/reason in this state.

In the early seasons, Steven had little control over his powers, which resulted in them working with unexpected results (Such as almost ageing himself to death and turning himself into an out of control cat monster on accident) or not working at all. However, this becomes much less of an issue in Seasons 2-3 and is nonexistent from Season 4 onwards.

While they tend to have far higher durability than his actual physical statistics (except possibly in Pink State), Steven's Shield and Bubble can become unstable depending on his emotional state at the time; if he is properly focused and prepared for an attack they possess their full durability, but when he is in emotional disarray, his shields/bubbles, when typically having At Least Multi-Continental durability in later seasons, have been broken by characters far below that tier such as Jasper or Bismuth.

Steven is a lot more pacifistic than the other gems, and refuses to kill anything due to feeling that it isn't right.

If Steven's gem is removed, he will slowly die unless he comes into contact with it again.

If Steven goes into other people's dreams too much he gets sleep deprived.

In his Pink State, many of his abilities are uncontrollable and respond to both his conscious and subconscious psychological issues; this weakness appears to be entirely psychological rather than being an inherent weakness of Pink State itself.

Red (Pokémon) Red's Profile (Both were 7-A. Speed was equalized)