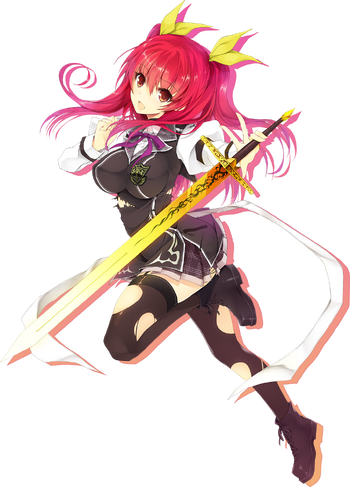 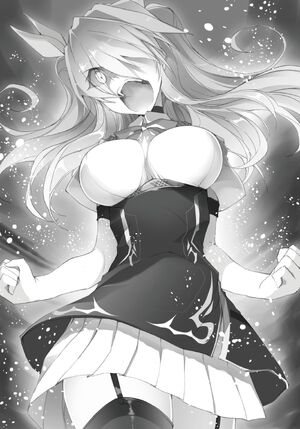 Stella Vermillion is an A-rank Apprentice Knight and the second princess of the Vermillion Kingdom. After a misunderstanding, she dueled Ikki Kurogane and lost, subsequently accepting her defeat and later became his closest friend and ally. After numerous trials and tribulations, the duo would eventually fall in love, becoming officially engaged after Ikki's victory over Touka Toudou.

Superhuman Physical Characteristics, Soul Manipulation (Blazers can manifest their souls as a weapon), Magic, Fire Manipulation, Expert Swordswoman (Her sword mastery is so exceptional that even Ikki stated that there were 0 wasted movements and not much he could teach her, even though Stella was purposely trying to make mistakes), Enhanced Hearing and Spatial Awareness, Social Influencing, Supernatural Luck (Her luck is A rank deeming it to be exceptional), can use magic to boost her physical stats and create a barrier around herself, she can reduce an opponents stamina with minor blows and cause them to faint with fatal blows whilst using her device in illusionary form, Accelerated Development (Her power grows at an extremely fast rate when fighting someone on the same level as her), Stealth Mastery with Trackless Step (A technique which uses breathing and footwork techniques to become suddenly unperceivable by the opponent becoming "useless information" as far as the mind is concerned. Virtually "moving into the unconsciousness" of the opponent), Heat Manipulation (Her Empress Dress surrounds her with fire that burns at 3'000 degrees celsius), Resistance to Soul Manipulation

All previous abilities to a higher extent post-training with Nene Saikyou, Vastly Enhanced Heat Manipulation (Once she unlocks her true powers she gains an enormous boost to the heat of her flames with her sword and Bahamut Howl being stated to burn at the same temperature as the core of the sun), Illusion Creation and Invisibility by bending the surrounding light with heat, Resistance to Absolute Zero (She was so hot, Mikoto couldn't freeze her sword and Bahamut Howl)

All previous abilities amplified to a great extent, Conceptual Manipulation (She embodies and manipulated the concept "Dragon", initially thought to be Elemental Manipulation her magic is actually the embodiment of "Dragon" present in stories, mythology etc.), Immortality (Type 3), Regeneration (At least Mid-Low, likely High-Low with Dragon Spirit. Could regenerate her body after Ikki used Madoka to break her ribs and cause damage to the organs), Fear Manipulation (With an fiery aura shaped as a Dragon she exudes a pressure causing fear. Ikki Kurogane was almost paralyzed in fear when she was fighting Stella, so much so that she was unable to land a clean hit in a seemingly advantageous fight, because his senses kept sensing fear), Passive Spatial Manipulation (Her heat was so extreme it started to warp space causing her to have a attractive force, when rock came near her they were completely erased from existence without a trace due to coming in contact with such heat that they skipped the process of being turned into plasma, it would have done so to Ikki's sword to if he hadn't used Oikage to go past her before Stella's body could erase his sword), Resistance to Heat Manipulation and Fire Manipulation

All previous abilities in addition to Acausality (Type 4. All desperados exist beyond fate of the world, completely transcending it. Through this Desperados ignore their restrictions from fate, Amane Shinomiya's Nameless Glory and even The Prime Minister who can see the fate of the entire world could not see anything about their fate or future), Fate Manipulation (As beings who have transcended the fate of the world, Desperados are the only ones capable of changing their own fate and the fate of the world around them), Statistics Amplification and Empowerment (The amount of magic a person possesses is linked to their fate and impossible to change, however Desperados are capable of changing their magic capacity increasing it to levels even beyond A-Rank students), Aura, Fear Manipulation, Willpower Manipulation, Paralysis Inducement, Perception Manipulation (All Desperados can make opponents experience extreme fear, paralyze them, make them lose their will to fight and alter their senses with their presence alone), Fusionism and Transformation (Stella is one of the rare Desperados capable of reaching Excessive Awakening which allows them to further increase their stats and fuse with their sword transforming their body)

All previous abilities in addition to Flight, Body Control (Learned to control her heart rate and energy consumption), Extrasensory Perception (Can extend her phosphorescence to feel everything in the battlefield)

Attack Potency: Small Town level in base (Stronger than base Ikki. Far superior to Shizuku Kurogane) | City level+ physically (6x weaker than Bahamut Howl) and with Bahamut Howl and amps. At least Large Mountain level+ with Dragon Spirit (It is her strongest Noble Art outside of Kalsarieteo Salamandra, as such it should be superior to Bahamut Howl. The boost in physical characteristics was stated to be several tens of times her previous amped state). | Country level in base (Several dozen times weaker than her Dragon Spirit form). At least Continent level+, likely Multi-Continent level with Dragon Spirit and Excessive Awakening (Overpowered Fu Xiaoli)

Lifting Strength: At least Class 25 (Easily swatted away a sword that was stated to weigh 10 tons) | Class M (Ikki stated it would have been possible for Stella to lift Big Baby) | Class P (Stronger than Fu Xiaoli)

Durability: Small Town level, higher with Empress Dress (It was impossible for Base Ikki to get past her Empress Dress) | City level in base. City level+ with amps. At least Large Mountain level+ with Dragon Spirit (Tanked her full hit after Ikki used Madoka to reflect it). Higher with Empress Dress. | Country level (Tanked hits from Fu Xiaoli). At least Continent level+, likely Multi-Continent level with Dragon Spirit and Excessive Awakening

Stamina: Extremely high; she has thirty times the magical capacity of a regular blazer, could endure severe burns all over her body even as a child, can shrug off a broken arm, melt her own bones with a smile, and fight normally even after losing a huge amount of blood

Standard Equipment: Lævateinn; Stella's Device, it takes a form of a golden broadsword with red markings on the hilt and is clad in the Dragon Breath's flames

Intelligence: Stella is a renowned prodigy in both swordsmanship and in the user of her abilities as a Blazer. Despite being ultimately outmatched in a contest of pure swordplay, Ikki, a swordsman of the highest caliber, noted that Stella's mastery of the Imperial Sword Style is practically flawless and there wasn't much he could teach her. However, as a somewhat sheltered and hormone addled teenager, she is sometimes prideful, reckless, and impulsive, leading to poor tactical decisions when riled up. Narration states her magic control is comparable to Shizuku Kurogane's

Weaknesses: A somewhat hot-blooded, reckless, impulsive, and prideful teenager, Never researches her opponent's abilities, Kalsariteo Salamandra requires a few seconds to activate, Not willing to use Bahamut Soul in one-on-one duels, destroying Lævateinn deals enough mental damage to knock her out, the flames from Empress Dress limit her field of vision

Stella's Excessive Awakening
Add a photo to this gallery