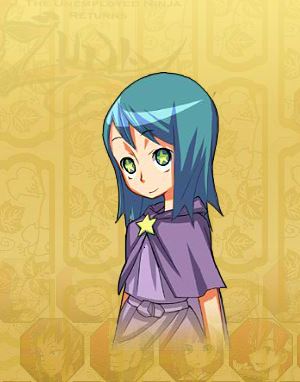 Stella is a supporting character and antagonist from Izuna 2: The Unemployed Ninja Returns. She's the foreign Goddess of the Stars, and Alte’s twin. Despite her cute appearance and gentle smile, she’s very spoiled and loves playing mean pranks on others. She plays dirty, using anything at her disposal to get what she wants.

Tier: At least 7-C, higher as EX, even higher as Shooting Star

Attack Potency: At least Town level (Scales to Izuna and Abyss), higher as EX, even higher as Shooting Star

Speed: Likely Superhuman running speed, Possibly Subsonic with Stat Amp, Subsonic+ combat/reaction speed (She can dodge arrows shot from right in front of her by jumping a few meters aside), higher attack speed

Durability: At least Town level, higher as EX, even higher as Shooting Star

Stamina: Vastly Superhuman, likely higher than Izuna due to being a God (She can keep fighting even after getting severely beat up, or having her stamina drained)

Intelligence: Despite her looks, Stella is extremely mischievous, using any dirty trick at her disposal to come on top. She’s also a very capable fighter

Weaknesses: Without Alte, she isn’t as strong

Note: Stella canonically always stays and fights with Alte, and cannot reach her full potential without him.

Retrieved from "https://vsbattles.fandom.com/wiki/Stella_(Izuna)?oldid=4642008"
Community content is available under CC-BY-SA unless otherwise noted.