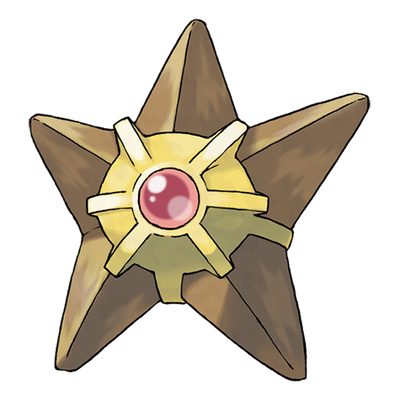 Starmie is a Water/Psychic type Pokémon introduced in the first generation, resembling a starfish that's doubled, and with red core in the center. Due to its weird design, strange habits, and mysterious nature, it was thought by some to be some sort of alien invader. It evolves from Staryu with a Water Stone. It is notable for being the only Pokémon to remain a competitive mainstay in all generations without being on the ban-list.

Attack Potency: Multi-City Block level+ | At least Mountain level+ (Equal to Cloyster, being its opposite)

Speed: Massively Hypersonic+ (Can fight with Shellder) | Relativistic+ (Faster than Pokemon that can dodge light based attacks, such as Golem)

Weaknesses: Electric, Grass moves, though this changes with Camoflauge and Reflect Type | Same as well as Ghost, Bug, and Dark moves