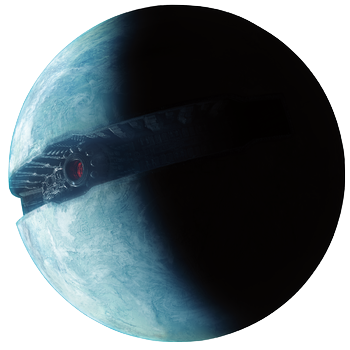 Starkiller Base was an ice planet that was located in the Starkiller Base system of the Unknown Regions that served as the headquarters of the First Order three decades after the Battle of Endor. The base was commanded by General Hux and was armed with a superweapon capable of destroying entire star systems, which the First Order viewed as an evolution of the planet-destroying capabilities of the Galactic Empire's Death Star designs.

Tier: At least 5-A with superlaser. High 4-C at full power

Age: At most 29 years (Construction must have began after the Battle of Jakku in 5 ABY. Was destroyed in 34 ABY. This means it is at the very most 29 years old. However, the planetoid from which it was built is obviously significantly older)

Powered by: Any nearby stars, using a method that cut off starlight from it's surface.

Attack Potency: At least Large Planet level with superlaser (Blew up Hosnian Prime and 4 other planets with one shot). Large Star level at full power (Drained the energy of an entire star)

Speed: Likely Sub-Relativistic realspace speeds. Massively FTL+ travel via hyperspace (Starkiller base is confirmed to be equipped with a hyperdrive. It is unlikely to be a mere Class 5, which is considered pathetic by military standards and capable of covering tens of thousands of light-years in a few days, and likely equipped with something far superior). Massively FTL+ attack speed with superlaser (Beam travels through hyperspace and is capable of striking targets tens of thousands of light-years away)

Durability: At least Multi-Continent level without planetary shield (Starkiller base is built out of a 660 km diameter planetoid. It's Gravitational Binding Energy would fall in this range), Higher with planetary shield (Likely at the very least as powerful as the deflector screens of the first and second Death Star. Larger and likely much more powerful than the Mandator IV and the Supremacy)

Weaknesses: If the thermal oscillator located on the planet's surface is damaged or destroyed, it can cause a catastrophic failure of the whole base and cause it to explode (It is protected by shields, however, which must first be disabled from the inside).

Terrain: Space (but its own surface is naturally a mountainous forested tundra)

Needed Prerequisite for Use: An entire trained crew of likely several thousand, a star to power the superlaser weapon and its hyperspace systems.

Weapons Range: 50,000+ light-years with superlaser (Capable of hitting targets halfway across the galaxy. From the Unknown Regions, superlaser can hit targets in the Core, Colonies, and Expansion Region)

Start a Discussion Discussions about Starkiller Base