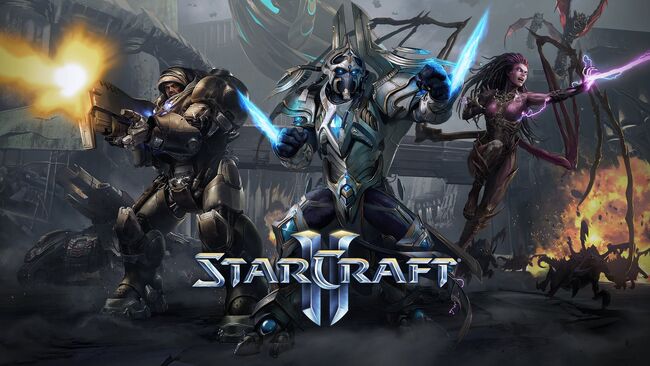 Starcraft is a military science fiction real-time strategy video game developed and published by Blizzard Entertainment and released for Microsoft Windows on March 31, 1998. The game later spawned a franchise, and is the first game of the Starcraft series. A Mac OS version was released in 1999, and a Nintendo 64 adaptation co-developed with Mass Media was released on June 13, 2000. Work on the game started shortly after Warcraft II: Tides of Darkness‍ '​s release in 1995. StarCraft debuted at the 1996 E3, where it was unfavorably compared to Warcraft II. As a result, the project was entirely overhauled and then showcased to public in early 1997, receiving a far more positive response.

As a sci-fi verse, the power can greatly vary, but is easily far above the real world. All three races have access to FTL space travel through technology, or advanced biology in the Zerg's case. Fodder troops such as Terran Infantry: Marines, Firebats, Marauders, Reapers, smaller Zergs: Zerglings, Banelings, Hydralisks, Mutalisks, and basic Protoss troops: Zealots, and High Templar, are Tier 8. Capital ships such as Battlecruisers and Carriers and the larger zergs such as Ultralisks and Brutalisks are Tier 6 scaling from Terran Nuclear Weapons and the Leviathan's tentacles. Hero Protoss Units are higher up on Tier 6 scaling from Sarah Kerrigan's storm feat and lore about Hybrids life wiping entire planets with ease.

Protoss also have access to Tier 5 weapons that can glass and crack planetary surfaces. The Xel'naga however are far above that; they range from Tier 5 based on their their planet busting weapons and lore statements put Amon, the leader of the Xel'naga at possibly Tier 4 due to supposedly being more durable than individually "Every star in the galaxy." The verse's power isn't truly revealed until the end introduces new improved forms of Amon and Sarah Kerrigan. Amon is said to be capable of blasting all matter in the universe in the blink of an eye making him 3-A and well into Massively FTL+. Kerrigan is much stronger than him, and possibly reaches up into Tier 2 as she erased the void that "transcends all creation."

In terms speed, despite access to Massively FTL+ travel speed and weapons with Massively FTL+ attack speed, most characters seem to lack concrete combat or reaction speed feats with most of them currently rated as Superhuman. However, their technology and hax more than make up for that. Between Ghosts cloaking and teleporting abilities, telepathically summoning life wiping nuclear missiles from the edge of the galaxy, advanced mind reading and mind hacking skills, Matter manipulation, mass energy conversion, and Void manipulation, advanced regeneration, and so much more, StarCraft is not verse messed around with.

Relative newcomers to the Koprulu sector, the terrans were forced to adapt to the harsh existence on the mostly lifeless worlds they found themselves in. They are masters of survival. With neither the advanced technology of the Protoss nor the natural prowess of the Zerg to rely on, the terrans fall back on their wit and their will to hold their ground.

The Terran specializes in adaptability, as seen in the units that fill the ranks of their military; from the basic but effective infantry like Marines to the heavily-armored Battlecruisers. They make use of heavy armor, plentiful firepower, defensibility and the preference to fight at a distance than trying to keep pace with their enemies up close. It is in defensive situations where they can position Siege Tanks and Bunkers can they truly excel.

The Zerg are entirely unlike the others in that they are composed of many different species that were integrated into the Swarm via infestation, than a single race. Lacking the tools of the Terran and the psionic prowess of the Protoss, such creatures evolve rapidly and selectively into ruthless killing machines to further the driving Zerg imperative of achieving absolute domination. The weaponry, armor, space travel and whatever other technology the other races have are instead, fulfilled through biological adaptation and planned mutation of Zerg strains. Even Zerg structures, are in fact, specialized organs within the living growing organism of a Zerg nest.

The Protoss are a highly advanced race with equally advanced technology and potent psionic abilities. However, as much as they are technologically superior to other races, they are also tribal and are a rigid stickler to traditions. As such, they have, though not as much as the Terran, quite the history of in-fighting which caused the rip in their society.

They once considered themselves the most powerful species in the galaxy. Their war with the Zerg however, proved otherwise as even their most individually able warrior will succumb to sheer numbers sooner or later. Now, with the loss of their homeworld, they lessened their grip on old traditions and allowed new tactics and technologies to be brought to bear, as well as reactivated the ancient weapons that they themselves locked away in fear of the power it brings.

Individual Protoss warriors are unsurpassed in their skills, and it is enhanced by the combination of formidable psionic strength and equipment. Nonetheless, their greatest strengths lies in their fleet, which boasts a variety of ships powerful enough to pound and enemy to atoms, as well as the mobility that only they possess.

Described as the most powerful beings the universe has ever known, the Xel'Naga are a godlike figure to the Protoss, referring to them as "Great Teachers", "Creators" and "Guardians". According to Protoss tradition, the Xel'Naga were peaceful, benevolent and utterly consumed with studying and propagating sentient evolution across the universe.