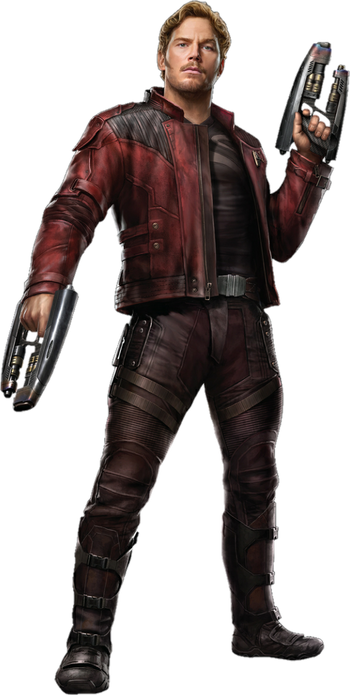 Peter Jason Quill is a half-human who as a young boy was abducted by the Ravagers. Sometime after his abduction, he began building fame as the legendary outlaw Star-Lord.

Deciding to leave the Ravagers, he stole the Orb, unintentionally becoming entangled in others' search for it. During this time, he formed an uneasy alliance with Gamora, Drax the Destroyer, Rocket Raccoon, and Groot, together forming the Guardians of the Galaxy. Peter later helped stop Ronan the Accuser from destroying Xandar, with the Guardians of the Galaxy continuing their adventures.

Tier: At most 8-C, likely higher with weaponry | At least 8-C, High 6-B via Expansion

Superhuman Physical Characteristics, Regeneration (High-Mid; Comparable to Ego's avatar, who regenerated after being reduced to a skeleton. Healed from impalement), Immortality (Types 1, 3, and 8; according to Ego, he will never age as long as his planet still exists), Self-Sustenance (Types 1, and 2), Energy Manipulation, Energy Projection, Matter Manipulation, True Flight, Resistance to Mind Control

Attack Potency: At most Building level (Fought the Abilisk. Killed multiple soldiers of Thanos' army. Held his own against Gamora), likely higher with weaponry (Restrained Spider-Man in the Iron Spider suit with his Energy Bola and threatened to kill him with his blasters. His Plasma Spheres can disintegrate two Sakaaran soldiers. His Quad Blasters can harm the likes of Korath and Ego's Avatar form. Incapacitated Gamora with the taser barrel of his blaster. Briefly pinned Iron Man against a wall with his Gravity Mine) | At least Building level, Large Country level via Expansion (Possessed roughly half of the power needed for this)

Intelligence: Above Average. Quill is an expert in close-quarters combat. He was able to hold his own against Gamora, an assassin trained by Thanos. He uses his two blasters as melee weapons to strike and knock his foes unconscious with a hard strike to the head. Quill is well-versed in the use of weapons from all over the galaxy, and he is especially skilled with his Quad Blasters. He was able to handle a Kyln Guard's rifle, despite never seeing the weapon before. Quill also mastered the art of thievery and evasion. The act of thievery was not even in his criminal record. He can also understand what Groot means like Rocket Raccoon, despite Groot only saying "I am Groot".

Weaknesses: His emotions tend to get the best of him, as he's prone to outbursts of rage and sadness when confronted by the death of a loved one. | His Celestial power is linked to Ego. If Ego dies, he will permanently lose it.