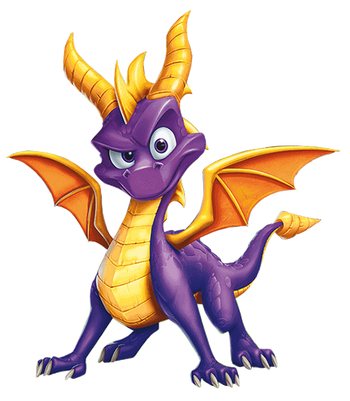 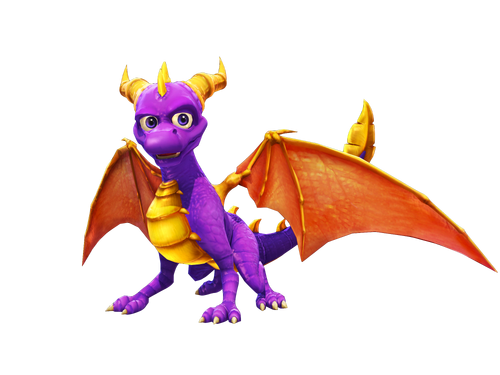 Tier: At least 7-B, higher with powerups and weapons | High 5-A

Superhuman Physical Characteristics, Natural Weaponry (Via his horns, tail and wings), Weapon Mastery (Used weapons against the Sorceress), Vehicular Mastery (Can pilot a tank and a flying saucer), 4th Wall Awareness (From time to time, made quips while turned towards the audience. Is aware of the 3-hits-and-the-Boss-is-defeated cliché), Elemental Breaths (Of the Fire, Lightning, Ice, Wind and Water varieties), Chi Manipulation and Martial Arts with Dragon-Kata, Acrobatics (Can use his tail to Pole-Spin), Stealth Mastery (Followed Agent Zero, a secret agent, to his hideout without being noticed), Poison Breath and Plasma Breath (Only in Ripto's Arena), Magic, Teleportation with Teleport spell, Telekinesis with Move spell, Weather Manipulation with Shock spell, Transmutation by himself with Egg spell, Limited Flight, True Flight and temporary Invincibility with powerups, Underwater Breathing (Type 2), Explosion Manipulation with Elemental Bombs, Attack Reflection with Wing Shield, Dimensional Travel with Shadowstone, Resistance to Transmutation (Can take Gnasty Gnorc's energy blasts, which turned dragons into crystals), Immunity to Life-Draining (Is immune to the Dark Gems' influence, which suck the life out of everything around them) and Magic-Draining Effects (The Shadow Realm, which is stated to absorb all the magic out of a creature, had no effect on him)

Superhuman Physical Characteristics, Proficient in melee combat, Natural Weaponry, Flight, Magic, Elemental Breaths (Of the Fire, Lightning, Ice and Earth varieties), Time Manipulation (In the form of slowing time), some degree of Clairvoyance (According to the Chronicler, Dragon Time allows Spyro to "see things almost before they happen"), Aether Manipulation (Can also be used to heal himself and open portals to other dimensions), Portal Creation (Aether Fury summons a portal from which multiple Spyro heads appear and home in on, repeatedly attacking enemies), Summoning (Fire Fury summons meteors from thin air), Homing Attack, Forcefield Creation (Can create an orb-shaped shield of electricity around him), Shockwave Manipulation (Can create shockwaves), Creation (Is able to create ice pillars and spikes), Weather Manipulation, Explosion Manipulation, Light Manipulation, Darkness Manipulation, Atomic Manipulation and Deconstruction (According to lead concept artist Jared Pullen, blasts from Dark Aether dismantles the target at an atomic level), Petrification (Dark Aether Fury turns opponents into stone), Can encase himself inside a time crystal

Attack Potency: At least City level (Defeated Grendor, who froze all the fairies across the realms and the Sorcerer, who brought a thunderstorm, which would require this much energy. Fought with Crash Bandicoot and Dr. Neo Cortex in the crossover), higher with powerups or weapons (Matched and defeated Ripto, who can easily dispatch Gulp and Crush. Thanks to several weapons he was also able to defeat the Sorceress) | Dwarf Star level (Defeated Malefor alongside Cynder. Created a vortex that pulled a nearby celestial body. Countered and reversed the power of The Destroyer, which was destroying the planet and creating a new one. Was able to pull the shattered pieces of the planet back together)

Speed: Supersonic+ (Able to follow and reach Gnasty Gnorc, comparable to Sparx; large dragonflies can reach up to 54 kph. Kept up with Crash Bandicoot and Dr. Neo Cortex in the crossover), higher with the Super-Charge. Massively Hypersonic+ flight/reaction speed (Can fly to the other side of the world in a short time. Can move in tandem with cloud-to-ground lightning) | Superhuman with Massively Hypersonic+ reactions (Dodged true lightning in the final battle against Malefor while flying inside stormy clouds) and Sub-Relativistic combat speed (Repaired the planet at these speeds)

Lifting Strength: Superhuman | Superhuman. Class Z with magic (Reconstructed the entire planet by pulling the shattered pieces back together)

Durability: At least City level (Far superior to Corporal Glug, can take hits from bosses like Gnasty Gnorc) | Dwarf Star level (Took hits from Malefor, a purple dragon with the same power and potential as Spyro)

Stamina: Very high (Can chase the Thieves for extended periods of time with no signs of fatigue. Can stay underwater for minutes at a time. Once did a prolonged supercharge course spanning multiple treetops with no fatigue) | Very high (Fought in the siege of the Dragon City and proceeded to fight the Destroyer and Malefor)

Standard Equipment: Shadowstone as of Shadow Legacy | None

Intelligence: Above Average (Can come up with quick plans on the fly. Exploits his opponent's weaknesses to the best of his ability. Can skillfully operate a tank, an airplane and a U.F.O.) | Gifted (He was able to understand Volteer's fast intellect and wide use of vocabulary. Fought an invisible Ape Commander by tracking his shadow. Utilized the Green Chains that tied him and Cynder together in creative ways. Has figured out Cynder's unusual plan with only a slight hint)

Weaknesses: Spyro is extremely curious, cocky and arrogant. His standard flame breath does not work on anything made of metal. His standard charge does not work on larger enemies. His superflame and superflight usually have a time limit. Without Sparx, he can be killed by enemies in one hit (though this could be a game mechanic) | If he uses all of his powers and abilities, then it will take some time for Spyro to recover all of them.

Note: This profile covers Spyro from the Classic and The Legend of Spyro timelines.