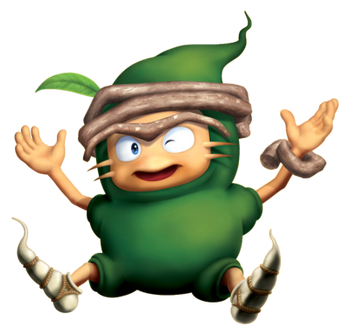 The Spritelings are a tribe who assist Wario in order to defeat the Black Jewel.

Attack Potency: Unknown individually (The Spritelings claim they need several of their own kind in order to do something lesser, such as rebuilding Wario's castle), Varies from Building level (Recreated Wario's castle) to Universe level+ with large groups (Overpowered and sealed the Black Jewel)

Speed: Unknown, possibly Massively Hypersonic (Fought the Black Jewel in the past)

Striking Strength: Unknown (They claim they aren't that strong)

Intelligence: Likely Above Average (Possessed knowledge about the Black Jewel and how to stop it)

Weaknesses: They aren't physically strong and rely on large groups to defeat someone.

Retrieved from "https://vsbattles.fandom.com/wiki/Spritelings?oldid=6044564"
Community content is available under CC-BY-SA unless otherwise noted.