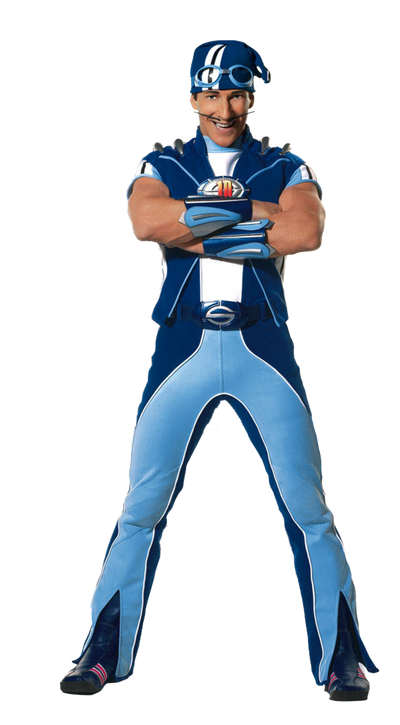 Sportacus is a superhero from the kid's show LazyTown. He's determined to teach the citizens of the town about being active and staying healthy. His arch rival Robbie Rotten often tries to get in his way however, albeit without much success.

Tier: Likely 9-A by himself. Unknown, likely 8-B with Sports Candy.

Attack Potency: Likely Small Building level (Consistently stated to be the healthiest and most fit person in LazyTown. Has foiled many of Robbie Rotten's plans). Unknown, likely City Block level+ with Sports Candy (Lifted a pyramid and towed a shuttle with escape velocity from the moon)

Speed: At least Subsonic (Outraced a cannonball. Is able to constantly react to his own zeppelin's practice sequence, which can shoot things at extremely high speeds. Was scientifically measured to be able to run 22.7 times faster than Robbie Rotten, assuming Robbie is as fast as the average human (15 mph without tire), despite being very unfit, Sportacus should be able to run 340.6 mph)

Durability: Likely Small Building level (Stated by himself and several of the cast to be the healthiest and most fit in LazyTown, so logically, he should be physically superior to Robbie Rotten, who has consistently survived being attacked by his backfiring traps on several occasions). Unknown, likely City Block level+ with Sports Candy.

Stamina: High (Consistently trains and free runs across LazyTown effortlessly but will tire if exposed to sugar or junk food)

Intelligence: Above Average (His knowledge mainly extends to sports, athleticism, health and training)

Weaknesses: He does not have any combat experience and is strongly against violence. Very peaceful and pacifistic. "Sugar" (Will pass out if he is exposed to "Sugar", although he can be replenished with Sports Candy).