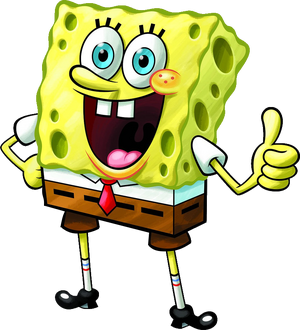 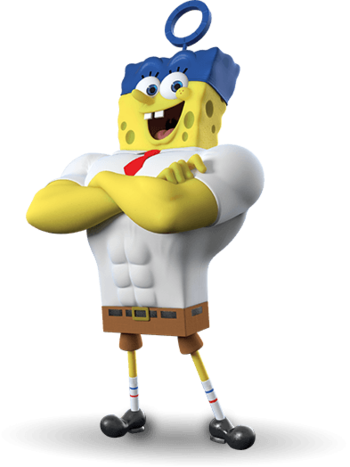 SpongeBob SquarePants is a naive and eternally optimistic sea sponge, and the eponymous protagonist of the series. He works as a fry cook at Mr. Krabs' restaurant, the Krusty Krab, and is the best friend of Patrick Star.

Underwater Breathing (Type 1), Body Control, Elasticity, Enhanced Senses (Smelled Krabby Patties from an exceedingly large distance), Shapeshifting, Size Manipulation, Bubble Manipulation, Surface Scaling, Flight, Absorption, Karate Master, Non-Physical Interaction (Can physically touch and harm The Flying Dutchman. Also seen here), Telepathy (Has the ability to affect dreams, read minds, transmit his thoughts to other people, etcetera), Regeneration (Mid-High, instantly regenerated from being reduced to a cloud of dust in "Dunces and Dragons". Regenerated from an explosion that reduced him to vapor), Immortality (Types 2, 3 and 7. Can live without his limbs and other mishaps without the need to regenerate; can regenerate from his injuries in a short timeframe), BFR with bubbles (Seen here. Trapped the Bubble Poppin' Boys in a bubble, causing them to float away), Reality Warping, Immersion (As seen here and here), Probability Manipulation (As seen here), Toon Force, Broadway Force, Life Manipulation (Can create living beings out of sand), Weapon Creation (Able to create weapons, such as explosives, from sand), Light Manipulation (Can create rainbows and ride them), Hammerspace (As seen here), Gravity Manipulation (via this), Teleportation (As seen here and here), Rock Manipulation (Can drive a boulder as seen here), Telekinesis & Sound Manipulation (Seen here, in The Legend of Boo-Kini Bottom, Spongebob's laughter physically hurt The Flying Dutchman), Camouflage (Seen here), Natural Weaponry (Can shoot projectiles from his pores), 4th Wall Awareness, Electricity Manipulation (via Goofy Goober Guitar), Vehicular Mastery (Has actually been shown to be a good aircraft pilot. If blindfolded, he can properly drive a boat), Fire Manipulation and Transmutation (Turned his fire-resistant suit into fire, then into Pretty Patties. Was also able to turn Patrick into a lifeless jar of mayonnaise), Weapon Mastery with his spatula and jellyfishing net, Explosion Manipulation, Duplication (As seen here and here), Air Manipulation (via Reef Blower), Invisibility (via Invisible Spray), Acausality (Type 1), Varied Stealth Mastery (At the end of Spy Buddies, Spongebob and Patrick revealed themselves to be in several perfect disguises of their friends), Superhuman Digestion (Ate screws), Darkness Manipulation, Statistics Amplification (With Krabby Patties), Wish Granting with the Trident, Resistance to Mind Manipulation (In "Plankton!", he possessed strong willpower that prevented him from giving Plankton a Krabby Patty while under mind control. Resisted Plankton trying to sabotage his mind with hypnosis. Ate Plankton's Jerktonium, which makes people subject to him, without any issues. When Plankton inserted SpongeBob's brain into a robot and forced him to make a Krabby Patty, he didn't do it), Empathic Manipulation (He and Squidward were the only ones not affected by Jerktonium, which also makes people bitter and miserable), Electricity Manipulation (Has tanked Jellyfish stings) and Poison Manipulation (Was largely fine after eating a bucket of chum, of which even a small sample can give characters terrible stomach-aches); With the Magic Book: Plot Manipulation, Power Bestowal, Magic and BFR (seen here)

Attack Potency: Varies from Below Average Human usually to Wall level at his peak (Survived the destruction of Bikini Bottom and can harm others who have as well) | Multi-City Block level (Comparable to Plank-Ton)

Speed: Athletic Human (Can outrun Sandy Cheeks), possibly Superhuman (Caught a flying pelican fast enough to pluck a feather from it). Subsonic with The Quickster suit (Ran to a rock and back in a very short timeframe) | Supersonic (Casually kept up with cannonballs)

Lifting Strength: Varies from Below Average Human usually to higher at his peak | Superhuman

Durability: Varies from Below Average level usually to Wall level at his peak | Multi-City Block level. Toon Force, absorption and regeneration makes him difficult to kill.

Stamina: Extremely high (In "To Save a Squirrel", he and Patrick survived being stranded in the wilderness for a year without any access to food, water, and proper shelter. In "Fear of a Krabby Patty", he worked a 43 day, 24 hours per day shift alongside Squidward and Mr. Krabs. In "Clams", he, Squidward and Mr. Krabs stood still for 3 days straight. Sat outside the Krusty Krab for 4 days straight in "Banned in Bikini Bottom") | Should be the same, if not higher than before

Intelligence: Varies (SpongeBob is usually shown as naive, gullible and clumsy. However, he is highly knowledgeable in some areas. In terms of fighting, he has been consistently shown to have as much, if not more skills than Sandy. He once made a fully functioning rocketship out of boat parts and was able to perform open heart surgery on Squidward. He is an expert fry cook and is also good at making clothes from scratch. He is a skilled musician, as he can play the guitar, drums, trumpet, ocarina, and flute. Although it may not seem like it, he is a remarkable aircraft pilot)

SpongeBob is very optimistic, and despite all the hax he has, he never leads with it unless prompted to directly or as a last resort. His usual leading move in his base form is karate, meaning that he will try to use Martial Arts against the opponent.

However, if the opposing character is noticeably bigger, SpongeBob is more prone to using others of his techniques, as he's aware his Martial Arts are usually ineffective against such, which include his Sand Manipulation and bubbles; if he has his optional equipment, he is very prone of leading with it and while he is too ignorant to use the Magic Book offensively, he knows how to use it, and is far more prone to use it defensively instead.

Although SpongeBob in this form is quite stronger physically, he now leads more with the bubbles than before (as the name suggests). He may also use the optional equipment accordingly if he has enough time for it (the Magic Pencil is virtually useless in a match as it has very poor range and area of effect, and the Quickster suit obviously can´t be stacked, but the Magic Book is still usable, but still defensively, as stated before

It should be noted that SpongeBob still has his hax and other abilities in this form, but the strategies for them are still as secondary options (other abilities) or as a last resort (regarding hax) unless prompted to.

Note: The events of "Squidward in Clarinetland" are considered as a hallucination.

Jimmy Neutron (Jimmy Neutron: Boy Genius) Jimmy's Profile (Both were 9-B, Speed was equalized, and both had their full arsenal)