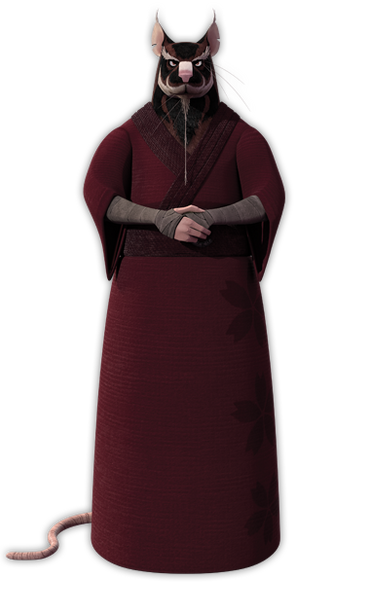 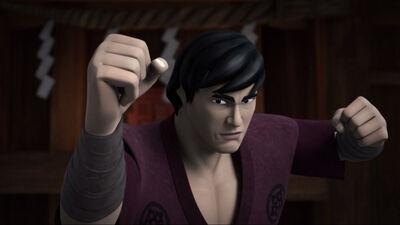 The mutant rat, mentor, and adoptive father to four ninja turtles known as Splinter had his beginnings in Japan as one Hamato Yoshi, growing up with Oroku Saki, both training in the art of Ninjutsu. While they grew up as friends and brothers, things changed when they both fell in love with a woman named Tang Shen, which transformed their friendship into a bitter rivalry. Shen chose Yoshi out of the two, and gave birth to a daughter, Miwa.

Their time together would not last, as Saki, after learning of his true heritage and rebuilding the Foot clan, and overwhelmed with anger and jealousy, burned down their house, and a blow that was originally meant for Yoshi struck Tang Shen instead, ending her life, and in those flames, he took the still infantile Miwa away from her father.

After this ordeal, Yoshi left Japan, and came to reside in New York City. On one fateful day, he bought four turtles, and as he walked, he stumbled into a mysterious man, trailing after him into an alley way. Eavesdropping on an exchange over a canister of ooze, he then provoked a rat, which ended up dropping his cover and instigating a fight. While Yoshi was able to defeat the men, the ooze canister broke, covering Splinter and his four turtles in it and causing all five of them to mutate, Splinter in particular becoming a giant rat.

For the next 15 years, he raised his four turtles as his sons in the sewers under New York, naming them after four artists of the Renaissance, and trained each of them in Ninjutsu, so that when the day comes that they want to leave the lair and explore the surface, they would be prepared for the dangers that lurk above.

Powers and Abilities: Superhuman Physical Characteristics, Martial Arts, Pressure Point Strikes, Paralysis Inducement, Healing, Sharp claws and teeth (Can snap Shredder's blades in half in his with teeth, as well as gash his skin with his claws), Prehensile tail (Can use his tail to trip or whip his opponents in close combat), Stealth Mastery, Enhanced Senses (Hearing, smell, and Sight. Can fight perfectly while blindfolded. Also possesses sensitivity to Universal Vibrations), Instinctive Reaction, Precognition, Psychometry, Smoke Generation (Via Smoke Bombs, which can also be used to disorient enemies), Status Effect Inducement (With blinding powder), Resistance to Mind Manipulation (Overcame the Rat King's control)

Attack Potency: At least Small Building level (Fought with The Shredder and one of the very few mutants who can clash with him on equal footing, only losing their multiple encounters due to Shredder's dirty tactics. Dispatched Tiger Claw in a single strike)

Speed: At least Supersonic+ (Casually swifter than all 4 Turtles)

Lifting Strength: At least Class 5 (Lifted and tossed several large metal pipes at once in a fit of rage)

Durability: At least Small Building level (He took a beating from Super Shredder and withstood an at least 1000 foot free fall)

Range: Standard melee range, Extended melee range with his staff and katana, tens of meters with shuriken, higher with teleportation

Intelligence: Extremely High combat-wise (Having trained in ways of the ninja for all of his life, Splinter is a great and powerful master of Ninjutsu. According to Rahzar, Yoshi is "one of the best" and he also claims that he's a skilled as the Shredder, the latter being evidenced by their numerous bouts, where Splinter usually only loses due to his merciful nature and Shredder's dirty tactics. It can be assumed that Splinter is far more skilled than Leonardo, Raphael, Donatello, and Michelangelo, as they all received their skills from training with him for over 15 years.)

Start a Discussion Discussions about Splinter (2012)