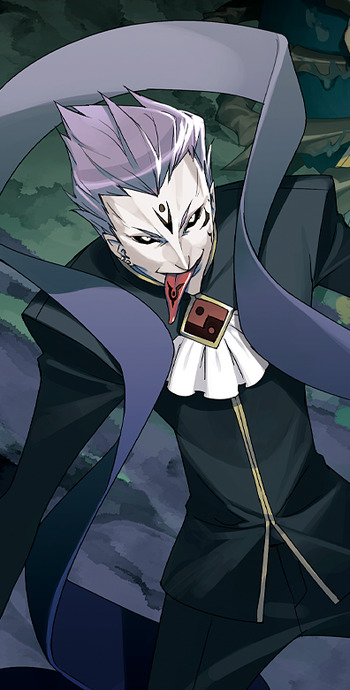 Spinner Superior was a major character in the Bloodedge Experience series. He was rumored to be the man who came the closest to the Blue. One of the best conjurers that the Magick Association had to offer until his expulsion for coming too close to the Blue. He was on the search for Raquel Alucard and was using his Apostles to search for her; reason being that she has the ability to feel the Blue in a manner similar to a radar.

Superhuman Physical Characteristics, Sorcery, Stealth Mastery, Life Manipulation (His apostles' life force are extremely drained, to the point that even a man in a critical condition with no way to live has better life force than them), Enhanced Senses (Sight, taste and smell), Transmutation (Can turn people to insects), Darkness Manipulation (Can use darkness to consume other people or use it as an attack method), Insect Manipulation and Summoning (Can summon his 15 apostles which are all insects), Creation, Mind Manipulation (Isa became irritated and perverted after he became an apostle), Absorption and Fusionism (Can absorb people using darkness or even use it to fuse with other people, such as Raquel), Teleportation (He can teleport using darkness), Telekinesis (Slammed Naoto to a wall with nothing more than few words), Regeneration Negation and Possible Existence Erasure (His strongest apostle can damage person's very existence, negating even Raquel and Naoto's regen), Regeneration (At least Low-High, possibly Mid-High; Regenerated after Naoto cut him to the point that not even a single piece of him can be seen), Immortality (Type 3), Weapon Creation, Soul Manipulation (Used Saya's Soul Eater to drain away Raquel and Naoto's soul and life and should've done it all by himself if he didn't have opportunity to kidnap Saya), Flight (Some bugs can fly), Statistics Amplification (Can amp himself by using magic circles), Extrasensory Perception (He and his apostles can sense magic), Status Effect Inducement, Acid Manipulation (His apostle can create very corrosive acid), Intangibility, Information Analysis (Even students of Sorcery can scan their surroundings), Forcefield Creation, Healing, Fire Manipulation, Energy Projection, Earth Manipulation, Explosion Manipulation, Vibration Manipulation, Ice Manipulation, Heat Manipulation, Death Manipulation, Weather Manipulation and Gravity Manipulation (As one of if not the most prestigious sorcerer in Magick Association's history, he likely should have more knowledge on Sorcery than Zwei, Kuon, Els, Drei, Acht or possibly even Sechs)

Mind Manipulation, Fear Manipulation (Resisted Raquel's Slave Red and her fear aura), Perception Manipulation and Soul Manipulation (Can get close to Naoto without any problems and his soul was fine after getting hit with Bloodedge)

All previous abilities plus Poison Manipulation, Madness Manipulation, Biological Manipulation and Statistics Reduction (Is made of seithr, which is poisonous, can induce addiction and deteriorate bodies as well as reducing the power of others), Technology Manipulation (Seithr itself is capable of messing with the technology of the NOL and sector seven), Shapeshifting (Can change shape of his body), Cloud Manipulation, Self-Sustenance (All Types), Curse Manipulation (Scaling from Arakune who can curse others), Invisibility, Clairvoyance (Should be able to see future by blackouts), Power Absorption (Can absorb people, including their souls, memories and abilities) and Telepathy

Same with his first key plus Decent Hand-to-hand Combat Skills, Magic, Air Manipulation (Via Tempest, he can control winds), Dream Manipulation (Absorbed Raquel who showed up in Naoto's dreams), Power Bestowal (Can grant someone vampire powers by biting them), Instinctive Reaction (Naoto, with his vampire power, was able to dodge his apostle's attacks without thinking), Necromancy (Scaling from Raquel who revived Naoto as undead of some sort), Blood Manipulation (Scaling from Raquel who created Naoto's arm using her blood), Immortality (Type 2, 3 and 5, possibly 8; Scaling from Raquel who was fine after her timeline is destroyed during Doomsday due to her connection to the Boundary and has weak connection to the world), Regeneration (At least Mid-Godly, possibly higher; Scaling from Raquel as Alucard clan can regenerate their own existence, even if they don't want to and can do self-observation. Raquel was fine after the destruction of infinite timelines during Doomsday, albeit it is unknown if she was erased or resisted it), Portal Creation (Was able to open a portal to Boundary), Fear Aura and Body Control (Scaling from the likes of Fuzzy), Self-Sustenance (All Types), Non-Physical Interaction (Can touch and damage intangible, incorporeal, non-existent and abstract entities), Acausality (Type 1; Unaffected by phenomena intervention due to being outside of reason), Invulnerability (All vampires are outside of reason), Biological Manipulation, Poison Manipulation, Madness Manipulation and Statistics Reduction (Embryo is almost entirely made up of seithr albeit his Embryo is small), Shapeshifting (Scaling from other Embryo, which can shapeshift), Dimensional Travel, Attack Negation (Scaling from other Embryo which undoes any attack to them), Non-Corporeal (Simultaneously exists and do not exist), Self-Destruction (Scaling from other Embryo, which when dies, world will be flooded with seithr and every souls will meld into one), Pocket Reality Manipulation, Power Nullification (Should know basic magic, which includes negating barriers), Law Manipulation (Scaling from Nobody, who can establish laws), Phenomena Intervention (Capable of creating phenomena interventions due to being Embryo)

Attack Potency: Large Planet level (Stated by Raquel that she and Naoto should be working together to even have a chance to beat him. Relius feared that Spinner might be unstoppable if his magic circles aren't destroyed, even with Valkenhayn around) | Unknown. Likely Large Planet level (Was quickly dispatched by Kiiro, albeit it is likely because of his mental state rather than his lack of strength, so he may be shouldn't far too below his original self) | Large Planet level physically (Stronger than before. Brutally dismembered Naoto's limbs). Multiverse level+, likely Low Complex Multiverse level with Hax (Has Raquel's power of Embryo which grants him power comparable to Blazblue Embryo). Able to ignore conventional durability in variety of ways.

Speed: At least FTL (Easily blitzed Naoto) | Unknown. Likely FTL | At least FTL (Faster than before). Immeasurable while using power of Embryo (Es, with Embryo, managed to travel through Boundary, a dimension beyond space and time)

Stamina: Unknown (Hasn't shown any activity outside monologuing and doing his bidding to bugs) | Unknown | Very high (Comparable to Raquel who can use magic for hours)

Intelligence: Genius. One of if not the most prestigious conjurer in history, making him smarter than most people in Ishana. Even with a little information about Azure, he managed to become the closest man to Azure. | Animalistic. His psyche has completely broke down to the point that he only knows few sentences. | Extraordinary Genius. Has knowledge 50,000,000 times more than that of an average human. Has knowledge over Boundary, reason and magic.

Weaknesses: Obsessed with Raquel and Azure. Overconfident. | Same with Base, is going to be erased by azure over time and his psyche and body is breaking down while his soul is getting sucked away. | Overconfident.

Retrieved from "https://vsbattles.fandom.com/wiki/Spinner_Superior?oldid=6210767"
Community content is available under CC-BY-SA unless otherwise noted.