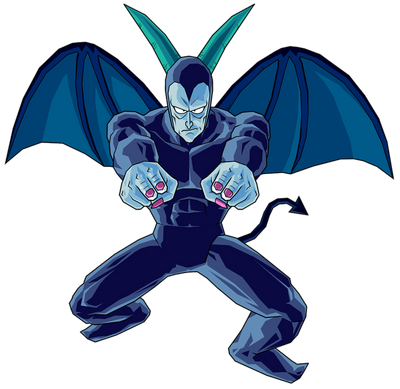 Spike the Devil Man, or just Devilman is a devil from Hell and one of Fortuneteller Baba's fighters; he was once the strongest of all her fighters, and has won the World Martial Arts Tournament in the past, but he was bumped down one rank by Grandpa Gohan.

Tier: At least 9-A, likely higher

Attack Potency: At least Small Building level, likely higher (He's the second strongest of Baba's fighters, making him superior to Bandages the Mummy, who defeated Yamcha prior to the 22nd World Martial Arts Tournament, and is second only to Grandpa Gohan), can ignore conventional durability with the Devilmite Beam (The Devilmite Beam magnifies all the negativities in an opponent's heart, causing it to explode)

Speed: Superhuman with Supersonic+ combat speed (The second fastest of Baba's fighters, making him faster than Fangs, who was able to outpace Krillin)

Intelligence: Devilman is a skilled and practical martial artist who does not hesitate to use his ultimate technique, the Devilmite Beam.

Weaknesses: Spike is overconfident, and the Devilmite Beam is completely ineffective on those that are pure of heart.

Ki: The fighting power and life force of a martial artist, a tangible energy derived from the user's vigor, courage, and mind. It can be used in a number of ways, such as to surpass the limits of one's body to greatly increase in strength, and it can be fired as blasts of energy or used to create defensive barriers.

Magic: As a devil, Devilman has some knowledge of magic.

Start a Discussion Discussions about Spike the Devil Man