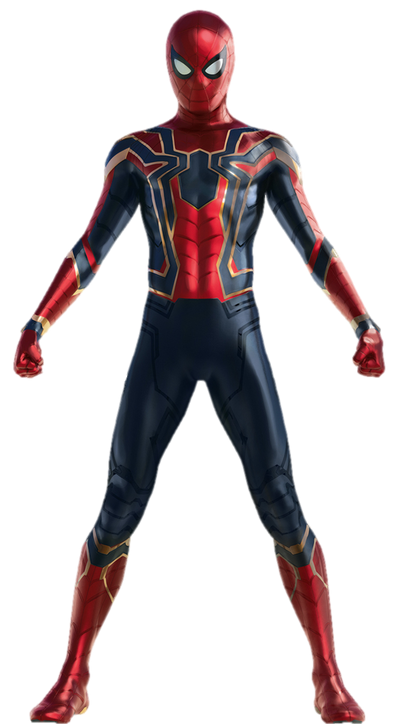 Peter Benjamin Parker is a high-school student and a superhero who possesses spider-like abilities under the alter ego of Spider-Man. Despite his best efforts to keep his identity secret from the world, he was found and recruited by Tony Stark to join the Avengers, gaining a new suit and technology in exchange.

He is currently a main character or a minor/supporting character in his respective appearances, most of which take place in New York City alongside other concurrent stories like The Avengers and Daredevil.

Age: 17-18 at the time of his death and resurrection

Superhuman Physical Characteristics, Superhuman Equilibrium, Master Investigator, Master Tactician and Marksman, Multilingualism (Understands Spanish and Italian aside from his native language English), Genius Intelligence, Acrobatics (Incredibly agile and nimble), Enhanced Senses, Surface Scaling, Regeneration (Low), Technological genius, Web Creation (Via Web-Shooters), Precognition (Able to avoid gunfire from numerous drones firing at him from different directions all at once while having all his other senses overwhelmed by the drones' advanced holographic technology. Easily intercepted the final sneak attack of Mysterio), Preparation (With enough time, he can create and customize his own suits), Hacking and Technological Manipulation (With the EDITH glasses, which were shown to tamper with phones and delete pictures), Information Analysis (With EDITH), Summoning (With EDITH, he can summon numerous Stark Drones to aid him in combat), Resistance to Illusion Creation (His Peter Tingle can guide him through illusions and make him overcome them)

Same as before, with better technology, Self-Sustenance (Type 1), Suit Materialization and Regeneration (Low-Mid) for his nanite suit, Four extra spider-like appendages from his back

Attack Potency: At most Building level (Should have comparable AP and Durability. Changed the direction of a plane, albeit barely. Held his own against Vulture, albeit barely. Caught a speeding SUV) | Building level (Held a ferry together. Blocked a punch from the Winter Soldier's bionic arm. Kicked Giant-Man in the face hard enough to make him sidestep. Caught Cull Obsidian's hammer. Destroyed Mysterio's drones) | At least Large Building level (Should be superior to Iron Man's second suit at the very least. Killed multiple Outriders in Insta-Kill Mode), possibly City Block level (Might scale to Iron Man's stronger suits. Slightly staggered Thanos with his blows)

Speed: Subsonic movement speed (Jumped on the roof of a bus and shot webs before a drone could perform a strike) with Massively Hypersonic combat speed and reactions (Dodged Vulture's attacks). Higher with Spider-Sense | Subsonic movement speed (Barely kept up with a car. Easily outran Black Widow. Comparable to Captain America) with Massively Hypersonic reflexes and combat speed (Matched Winter Soldier and Falcon in combat at the same time. Dodged Scarlet Witch's attacks and should be comparable to her. Dodged attacks from Chitauri-based technology). Higher with Spider-Sense (Dodged multiple automatic fire attacks from Mysterio's drones at the same time) | Massively Hypersonic combat speed and reactions (Dodged meteors. Dodged automatic fire)

Lifting Strength: Class 10 (Lifted 2 HVACs albeit with great difficulty), Class 50 with webbing (Caused a plane to change direction. Briefly prevented a clock tower based on the St Mark's Campanile from falling) | At least Class 50 (Comparable to, if not stronger than Captain America. Support the weight of a jet bridge), Class M with Webbing (Held the 3,200 ton Spirit of America Ferry from collapsing in half) | At least Class 50, likely higher. At least Class M with webbing (Stronger than before, helped restrain Thanos)

Durability: At most Building level (Survived being blasted through school buses by the Shocker, whose gauntlets are even more powerful than the ones Crossbones used on Captain America. Tanked a building falling onto him. Barely survived a plane crash and a brutal beating by Vulture) | Building level (Survived holding a ferry together, a jetbridge falling onto him, an accidental slap from Giant-Man, a few serious hits from Captain America and caught Winter Soldier's punch without any trouble. Was fine after being thrown at a van so hard it toppled. Survived being thrown around by Cull Obsidian. Withstood missiles from Mysterio's drones) | At least Large Building level, possibly City Block level (Endured being taken down and thrown by Thanos. Withstood multiple missiles from Sanctuary II)

Intelligence: Genius (Created his web-shooters under a very limited budget, customized his suit, figured out a way to defeat Mysterio)

Weaknesses: Was previously unable to control his Spider-Sense, although he has overcome this weakness

Homer Simpson (The Simpsons) Homer's Profile (Spider-Man was in his first key, and speed was equalized)

Knack (Knack) Knack's Profile (Both characters were 8-C, and speed was equalized)