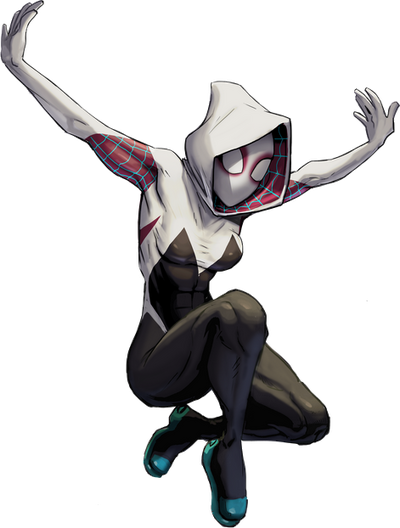 Gwen Stacy was bitten by the radioactive spider rather than Peter Parker giving her the abilities of a spider. She goes by the name Spider-Woman and much like Spider-Man of Earth 616 used her newly found powers to for more personal gain rather than helping people by becoming a professional drummer. Peter Parker remained a weak individual that Gwen needed to save from bullying. This made him develop an inferiority complex causing him to create a serum to make himself more like Gwen after she has revealed to him her powers. This causes him to become Earth 65's version of the Lizard and Gwen is forced to fight him. Unfortunately due to the serum during the battle Peter dies and she vows to use her powers for good. Unfortunately, Gwen is blamed for Peter's death and a campaign against her (spearheaded by J. Jonah Jameson) is started.