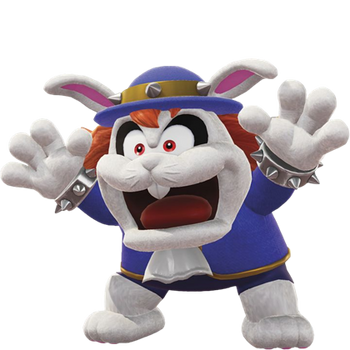 Spewart is Broodal, a rabbit-like species that originated from the moon, one of the wedding planners hired by Bowser to deal with Mario and steal some of the world's most prized possessions, and an entertainer, whose poison spitting abilities are described as artistic.

Speed: Massively FTL+ (Was able to keep up and react to Mario)

Retrieved from "https://vsbattles.fandom.com/wiki/Spewart?oldid=6281351"
Community content is available under CC-BY-SA unless otherwise noted.