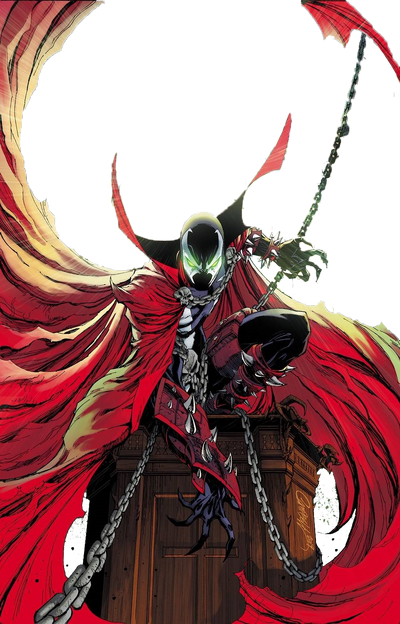 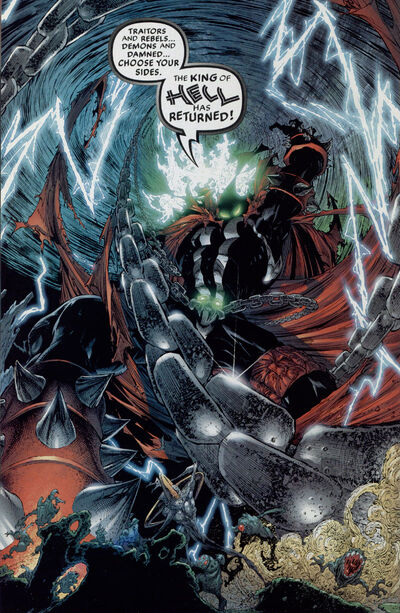 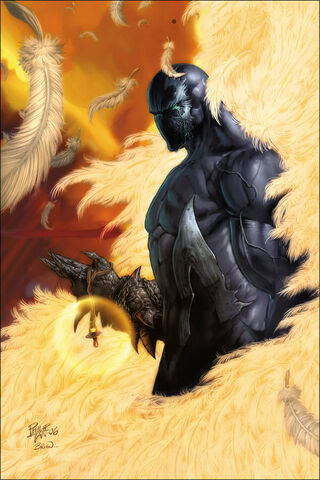 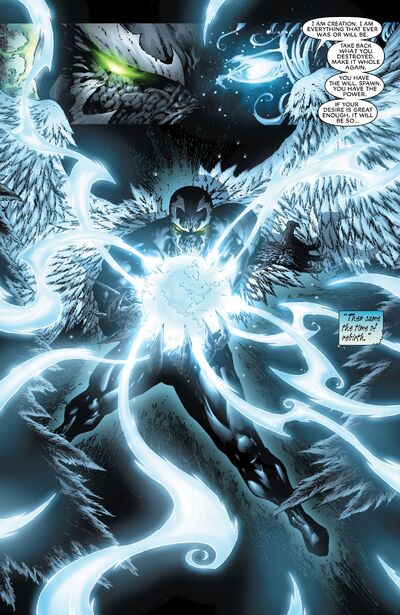 Spawn was once a man named Al Simmons, a highly trained assassin and was considered the best. He was a well-known soldier who was at his most successful point when he saved the President from an attempted assassination. He was promoted to a higher level of the C.I.A. that dealt with the things the Government had kept a secret from the general public. However, Al soon realized that the Government wasn't always right and started questioning if they were truly correct in their actions. This caught the attention of people in high power.

Jason Wynn who had long since been his superior found out about this and knew that Al knew too much. So he hired Chapel who was Al's friend and partner to kill him. In a blazing inferno, Al Simmons was murdered and his soul was sent to Hell because he had knowingly killed innocents in his C.I.A. days.

Al made a deal to sell his soul to a Demonic Being known as " Malebolgia" to get to see his wife Wanda Fitzgerald once again. He was allowed to come back however he came back five years later as some kind of strange Hellspawn with no memory of what he had done. After remembering what he had done, he sought out his wife only to find she had moved on and married his best friend, Terry Fitzgerald and had even had a child named Cyan.

It was after this event that his demonic guide the Violator who appeared as a clown showed up. He revealed to Spawn the purpose of his life and fought him but had his battle interrupted by Malebolgia. Now realizing his purpose he must fight to survive against both the forces of Heaven and Hell.

Superhuman Physical Characteristics, Immortality (Type 1, 2, 3 & 7), Necro Energy, His Sentient/Symbiotic Costume composed of Necroplasma/Psychoplasma, Chain Manipulation, Enhanced Senses, Poison Manipulation, Magic, Reality Warping, Energy Manipulation (Through Hell Energy he can fire Energy Waves, create Hell Bombs and release Hellfire, which can destroy opponents on a molecular level), Precognition (His Suit senses and reacts to danger before it presents itself), Regeneration (Low-Godly, can reform even if his physical form is erased), "Teleportation" (Capable of decomposing and travelling at the Speed of Light), Aporting (Capable of telepathically teleporting objects away from him), Healing/Resurrection (His Necroplasma can regenerate him from any wound, heal any disease and resurrect the dead), Illusion Creation, Black Hole Creation, Power Nullification (Can depower and repower demons), Summoning (Can Summon hellish beasts/monsters to attack his enemies), Time Stop, Shapeshifting (Can change his appearance, or transform into a flock of bats), Intangibility/Phasing, Darkness Manipulation, Elemental/Weather/Nature Manipulation (Has the powers of the Green World, being capable of controlling nature at will, forming forests, creating storms, tsunamis & Earthquakes, etc.), Telepathy/Empathic Manipulation (Connected to all pain and suffering in the whole world, and capable of transferring all his pain to others with a touch), Mind Manipulation (Can cure insanity, implant memories and trapping persons in Hellish Mindscapes), Explosion Manipulation, Resistance to Time Stop (Should be comparable to Cogliostro, who, at the time, was a Demon weaker than Spawn, is unaffacted by Spawn's Time Stop) and Mind Control (Malebolgia cannot cantrol Spawn due to him having about 6000 souls trapped inside his head)

Soul Absorption (The sword shows to devour souls of all it cuts), Sealing (Seal Hell away from Earth)

Attack Potency: Solar System level (Comparable to, or stronger than Angela), Low Multiverse level with the Sword of the Spirit (It injured Satan) | Universe level+ (Holds absolute control over a universal realm of Hell, which is infinite in size. Can also create universes with their minds) | Low Multiverse level (Equal to God and Satan, stated that he can fight them for all eternity) | At least Multiverse level+, likely higher (Became one with the Mother)

Lifting Strength: At least Class K, likely Class M (Threw a chunk of a building and is comparable to Violator) | Unknown | Immeasurable | Immeasurable

Intelligence: Gifted. Al's most dangerous asset is possibly his cunning mind, as it's aided him out in his military career and his career as Spawn. He's tricked everyone from the start, including God, Satan, and entire armies of Heaven and Hell. Every move that he's done was on purpose, even when he chose Jim Downing to be the second Spawn to carry out his plans. Spawn has mastered thirteen forms of martial arts throughout his life and can fluently speak ten languages. Possibly Nigh-Omniscient when merged with the Mother

Weaknesses: Can be killed if decapitated by Heavenly Weapons and has Limited Necro-Energy | Spawn's powers start to drain in the Greenworld and all of his past haunts him, slowing him in combat | In The Dead's Zone, Spawn is rendered mortal and powerless and he must abide by the laws of the Greenworld rather than those of Earth or Hell | None notable