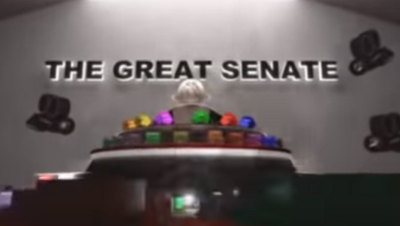 Spaceland is the civilization inhabited by 3-Dimensional geometrical beings, which exists beyond Flatland. Every 1000 years, a "Messiah" from Spaceland manifests in Flatland to reveal the Gospel of the Three Dimensions. The movie follows the protagonist, A Square, who is taken into Spaceland by A Sphere.

Age: At most 3000 years (After the beginning of the third millennium, it was stated that 3-D beings manifested in Flatland every thousand years since time began)

Population: Unknown, at least millions due to being divided into several different nations

Territory: Several nations (Including the X-Axis and unnamed "enemy nations")

Attack Potency: Human level for individuals. Wall level to Large Building level with technology (Most of their vehicles should be in this level due to sheer size, speed, and caliber of weaponry. Their technology can destroy buildings that were shown to be significantly large, such as the Messiah Inc. headquarters). At least Town level, possibly City level to Mountain level with nuclear weapons (Shown here, here and here. Considering their futuristic advancements, their best nuclear weapons could possibly be comparable or superior to humanity's most powerful)

Industrial Capacity: Very high (To the point where they use multiple atomic bombs as soon as a war breaks out)

Weaknesses: Nations are in conflict over their opposed views on Flatland. They appear to have a few scientific missteps such as believing that the Sun is "immeasurably huge" and sometimes worshipping it

Retrieved from "https://vsbattles.fandom.com/wiki/Spaceland?oldid=5824729"
Community content is available under CC-BY-SA unless otherwise noted.