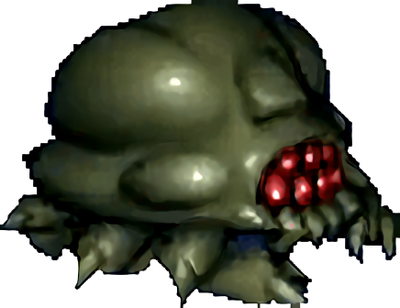 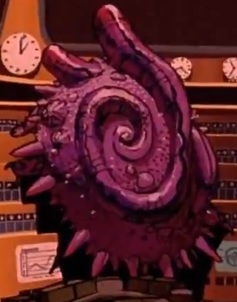 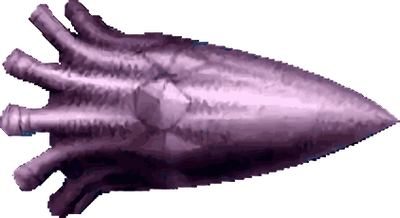 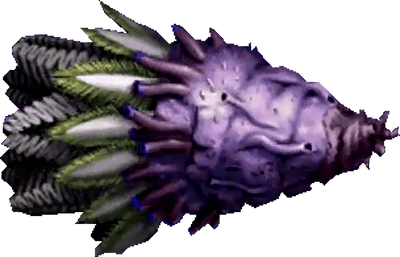 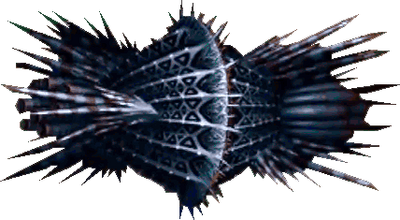 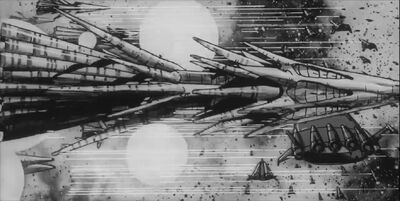 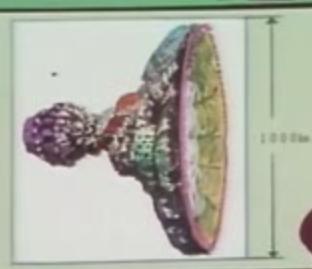 The Space Monsters (宇宙怪獣, Uchuu Kaijuu) are the main antagonists of Top o Nerae! Gunbuster and Top o Nerae 2!: Diebuster. There are several different types, ranging from large insectoid aliens to entire organic alien motherships. They feed off of the energy of stars, causing them to age rapidly and eventually supernova. They lay their eggs in stars. Their nest is located in the Galactic Nucleus. In Top o Nerae! Gunbuster, they are described as the white blood cells of the galaxy, which see humanity as a virus.

Origin: Aim for the Top!

Classification: Interstellar alien swarm (speculated to be a type of galactic/universal immune system)

Age: Unknown (have been living in the Milky Way considerably longer than humanity)

Territory: All over the galaxy but main holding is the entire galactic core of the Milky Way

Technology/Abilities: Superhuman Physical Characteristics, limited Physical Law Manipulation, Flight (in both an atmosphere and in space), Energy Manipulation (including Energy Projection, Heat Beam Emission, Plasma Bolts, Entropy Reversal), Large Size (Type 2 to 4), Spatial Manipulation, Teleportation, Portal Creation, FTL, Subspace Travel, Telepathy, Enhanced Senses (Can sense warp signatures), (Matter Manipulation (Can alter its own mass, Gravity Manipulation (Can create fluctuations in gravity), Immortality (Type 1; can remain in a state of indefinite hibernation), Spike Projection (can fire thorn-like projectiles which can pierce the hardest armor found on Earth's most advanced ships and discharge hundreds of drones inside), Self-Sustenance (Type 1, 2 & 3; individuals can survive for over twelve thousand years with little to no sustenance), Physics Negation, Reactive Evolution (Can adapt to and ultimately thrived in a black hole) Resistance to Radiation Manipulation, Physics Manipulation, Absorption, Ice Manipulation (and Absolute Zero), Disease Manipulation (via having a totally exotic biology), Energy Manipulation, Heat Manipulation, Plasma Manipulation, Gravity Manipulation and Black Holes, Light Manipulation (Can generate Clefshin luminescence), Can also travel forward in time (via time dilation), Telekinesis, Stellar Manipulation, passive Reality Warping, Evolving Absorbing Replication, Camouflage (can emit a protective coloration within their carapaces, which does help disguise them out among the sea of stars), Many of them can carry swarms of smaller drone creatures in their bodies, Planetary Destruction (the largest Space Monsters can likely destroy planets with their blasts), Self-Destruction (at least one type can self destruct at will), Fusionism via Reactive Evolution (can regenerate and fuse overtime when reduced to nothing but information), Shapeshifting

Attack Potency: Town level (can shatter the armour of a RX-7 Machine Weapon with almost contemptuous ease[1]) | Moon level, likely Small Planet level (capable of blowing holes in large moons and annihilate a large fleet from the far side[2], should be comparable to its durability) | Multi-Continent level | Dwarf Star level (Billions of them managed to bring down the BM3 barrier[3]) | At least Dwarf Star level, possibly higher

Durability: Town level | At least Multi-Continent level, likely Small Planet level (their eggs are laid in the cores of stars and infants are already durable enough to withstand this environment at birth[4]) | Unknown (Reflected Gunbuster's buster beam[5]) | Unknown | At least Dwarf Star level, possibly higher via back scaling from the Exelion

Power Source: The nuclear heart of stars are used as incubators initially, but theorized to be similar to those used by physical cancellers.

Industrial Capacity: Their breeding cycle depletes most of a star's available fuel in less than ten years, their 'fleets' can be dozens of AUs wide with some Space Monsters reaching the size of small moons.

Military Prowess: A swarm of an invasion force can amass to about 3 billion the size of 80 AU, described by observers as 70% of the field of vision was covered with the enemy's shadows and even the color of the universe changed (at first it was described to be over 100 million, 250 million when engaging the front line). A fleet can go to 12 billion in the Galactic Core.

Intelligence: High; in subspace where radar waves can not be used and electromagnetic waves and gravitational waves can not be measured, they can identify the Earth fleet and submerge most of the ships, able to come up with plans and strategies with telepathic communication with others

Standard Tactics: They have the ability to track and engage an enemy fleet while under warp, which was once believed to be impossible. They also attack in enormous groups numbering in the billions, as Space Monsters rely on overwhelming human fleets. The drones, which are relatively short-lived, are single-minded in their purpose. Once they leave the host body, they do not stop until they destroy what they are sent after, or until they are killed.

Weaknesses: Dies off after being separated from their mother for a certain period of time (about 2-3 hours) for the Grunts, the weak point is electric current, and the reason machine weapons and buster machines are equipped with electric shock weapons

The smallest individual. It looks like an insect. The number is the largest among all types.
Usually, it is parasitizing and proliferating on Cruiser-class SM, but when it finds an enemy, it moves away from it and acts with destructive instinct.
Life in outer space is about 2-3 hours.
Although the individual strength is low, it has enough combat power to fight with machine weapons.

As an side note, although the minimum size is quite large as shown above, in the "Super Robot Wars" series, it is set to "Size S" (applicable units are about several to 10 m).
This is because it may be illustrated in a size that is not so different from a machine weapon of about 10 m even during the game's development.

It is a variant of the Grunts with a focus on artillery battles and looks like a snail. In the 5th episode of Gunbuster, it was invading the Exelion ship with the Grunts.

It is a space monster that plays the main role in fleet battles, and has warp capability by itself. The basic shape is a conical shape, but the shape varies from individual to individual. During battles, it can use light bullets, light rays, spear-type fast bullets, etc., and it can also release Grunts. In addition to Grunts, several small space monsters are parasitized to play the role of turrets, barriers, and burnishing motors. It can accurately capture and attack the enemy position even in subspace, and when the Exelion fleet made a very long-range warp toward the solar system, it sensed the burnishing drive wave and entered the subspace in pursuit.

It is the smallest category in the Cruiser class. It has a needle shape and the total length is about 500 m to 2,000 m. In the fifth episode of Gunbuster, it pierced the hull of Exelion and released a large number of Grunts and tanks from the inside. It has a kind of command tower role and has an excellent ability to detect gravity waves.
Mainly short-range warp and operates by instinct.
The landing boat has 30 to 40 Grunts in it.

A Cruiser class that is even larger than a landing boat.
The wing-like object extending at the rear is a radiator, and it is capable of putting a gravity field shield.
Capable of sub-light and warp speed movement. Capable of accurately capturing and attacking enemy positions even in subspace.

A type that has become the main Cruiser class. The total length is over 3,000 m. There are individuals of various shapes, and the shapes of individuals are quite different. In the 4th episode of Gunbuster, it played a part of the group that sought out the Exelion fleet. Compared to the mixed type, the attack power is low but the speed is fast. Endurance is overwhelming, and it was unaffected even after a few hits of photon torpedoes, but it could not withstand Gunbusters attacks.

Among the Cruiser class, it is the flagship class of this group. The total length is 3,000m to 10,000m or more. Like the high-speed type, the shape varies from individual to individual. Stronger than other types and less in number (still hundreds of millions), it has the advantages of the landing boat and the high-speed type, and has excellent power in all respects. It became the flagship of the group that chased the Exelion fleet in Episode 4 of Gunbuster, and it struggled the first battle with Gunbuster, but in the end it was destroyed by its Buster Collider. Also, in episode 5, more than tens of thousands of individuals attacked Exelion, but they are unilaterally trapped by the combined Gunbuster.

In Diebuster, an individual called Titan Fluctuating Gravity Well that hibernated in Titan for about 10,000 years appeared. The total length is 3,000m and the maximum width is 600m. This individual can fire a huge fireball from the opening at the top of the head. At first, the excavation work was carried out under the assumption that it was an “alien buster machine”. After waking up from hibernation, it overwhelmed the Fraternity buster machines and the Buster Legion, but was destroyed by the awakened Buster Machine No. 7 Buster Beam Slash.

A transcendent giant individual that far exceeds the 240 m height Gunbuster.
Has numerous needles and a number of sharp points and the top and bottom.
The combined monster have the ability to split into two bodies and compress the target in between.

The type that sandwiched Gunbuster from the top and bottom in Episode 5 of Gunbuster. Two disk-shaped monsters are paired. It seemed to be quite large, and the whole picture was not clear on the screen. The sandwiched part seems to have been mirror-finished surface, and the buster beam was reflected, but it was annihilated with Double Buster Collider.

The type that hits the target and conducts suicide attacks. The shape is like that of the Cruiser class, and the exact size is unknown, but it surpasses the Super Exelion class. Appeared in large quantities in Episode 6 of Gunbuster and made a suicide attack on Buster Machine III.

The largest type confirmed at the time. The total length reaches several thousand kilometers. It has a huge disk-like body and houses a number of cruiser classes. Even its photon torpedo was defeated. In the PS2 version of the game, it was locked as a de facto last boss, but in the end it was torn in half with Gunbuster's Buster Beam.

Its existence was introduced in the science lesson, and a few was destroyed by Exelion during the Galactic Core Assault.

Appeared in the novel “Aim for the Top! Next Generation”. A Twin Exelion that was a separate unit of the galactic center-invading fleet artificially controlled the evolution of the Space Monsters and failed to create a “natural enemy” for the old Space Monsters, and was taken over by the Space Monsters. The ones that inhabit the ship include equipment and ingredients, machine weapons, Gunbusters, sizzlers, and other things that mimic human beings in order to operate equipment, intelligence and in addition to consciousness, there are some that look like the neck of a huge person who has the ability to sense emotions, and it seems that human memory can be captured by ingesting the brain.

A type that has evolved to infiltrate the human race and mimicked the human race. This applies to Mike Loft and Jenny Carl, who appeared in "NeXT GENERATION Excavation Battleship Alexion". Although it looks human, its physical ability and analytical ability greatly exceed those of humans. Also, in addition to having high intelligence and communication ability not found in other space monsters, instinctive reflex behavior is thought to be of Space Monsters that have been acting with instinct until then, but not having high intelligence. It also has a “will” that evolved to the limit. Jenny Carl is an anti-proton bomb creature that can self-destruct from the Orion arm to the center of the galaxy. However, mentality is still very different from humanity, for example, it does not feel shame, and it often becomes completely naked even in public and confuses the surroundings. 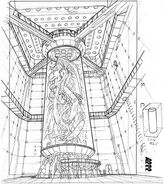 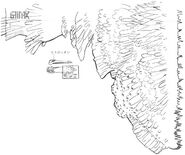 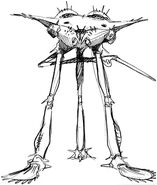 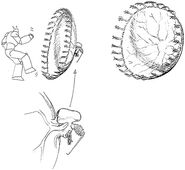 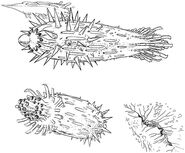 Start a Discussion Discussions about Space Monsters (Aim for the Top!)