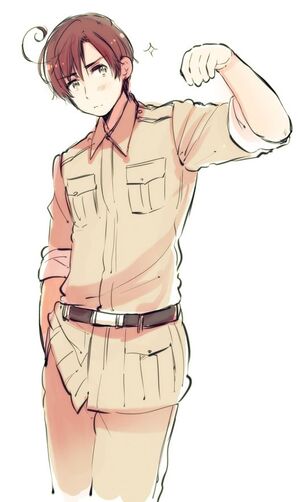 South Italy (南イタリア, Minami Itaria), often referred to as Romano (ロマーノ, Romāno), is a supporting character in the series Hetalia: Axis Powers and the older brother of North Italy. Between 2007 and 2008, Himaruya gave human names to some of the characters and he received the name Lovino Vargas (ロヴィーノ・ヴァルガス, Rovīno Varugasu).

Speed: At least Subsonic, with Relativistic combat speed (Comparable to China who could react to beams of pure light, fought several aliens in single combat). Has the ability go up to Supersonic+ but only with the assistance of military planes

Lifting Strength: Class 100 via power-scaling off of Russia .

Durability: At least Small Country level, possibly higher (He is an anthropomorphic manifestation of a country, but it does not seem necessary to actually destroy the land mass in order to kill him, simply to destroy the culture or population, or to change the borders, nature, and name of the nation. Also, should have similar durability to Russia, as he jumped from a plane from an unknown altitude and survived)

Stamina: Superhuman (Possibly higher. Was stated and able to run 15 km a day nonstop when retreating in a desert climate from Britain, could be comparable to Australia who has easily went for a 10 km swim (6 miles) and has mentioned he has swam across the Dover Straight which is 34 km long (21 miles).

Standard Equipment: Any Italian firearm or other weapon.

Intelligence: Genius. The nations speak every human language, created their own exclusive language, been around from hundreds to thousands of years, and are military strategists with countless battle experience.

Weaknesses: He tends to give up very easily even though he tries to act tougher than his brother. However, South Italy should not be underestimated. Cannot use nukes without American orders.

Note: Due to their powers (Type 8 Immortality, based on Country) to defeat/kill them permanently an opponent would need to have planetary range and the capability of killing billions of humans en mass (which is sufficient enough power to wipe out a respective country along with humanity) or Concept Manipulator to beat them.

Retrieved from "https://vsbattles.fandom.com/wiki/South_Italy_(Lovino_Vargas)?oldid=4592642"
Community content is available under CC-BY-SA unless otherwise noted.