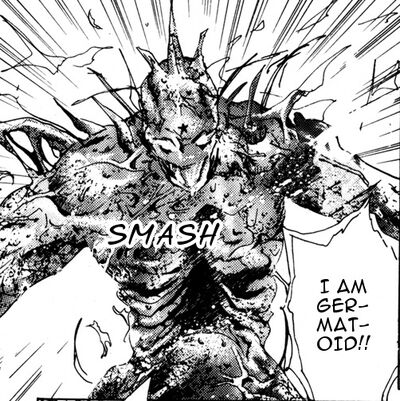 Professor Souichi Tomoe is the leader of the Death Busters, the founder and owner of Mugen Academy. He was originally a scientist well-versed in genetic manipulation and cybernetics who was ostracized by his peers for his unethical experiments to create superhumans, selling some of his findings to companies to buy an entire Tokyo district. When his daughter Hotaru was mortally wounded in a fire that killed her mother Keiko, Tomoe used his knowledge to keep his daughter alive as a cyborg. But at that moment, Tomoe witnessed his assistant being turned into a human-Daimon hybrid and offered himself willing to the Death Busters' cause. His resolve disturbing enough that he willing merged with a Daimon, Tomoe intends to use the Daimons to achieve his goal of creating super beings.

Attack Potency: Multi-Solar System level via powerscaling (Above Kaolinite and the rest of the base Outer Guardians with their talismans [except for Saturn])

Tomoe transforming
Add a photo to this gallery

Retrieved from "https://vsbattles.fandom.com/wiki/Souichi_Tomoe_(manga)?oldid=5753082"
Community content is available under CC-BY-SA unless otherwise noted.