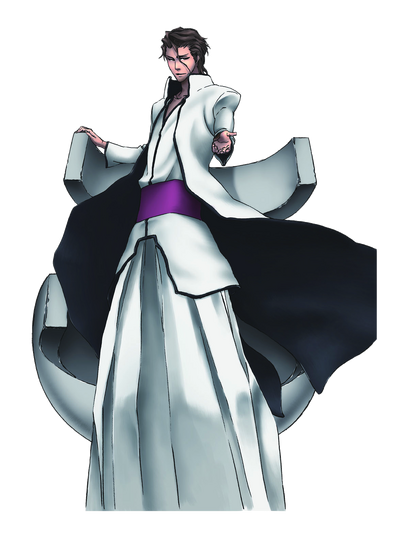 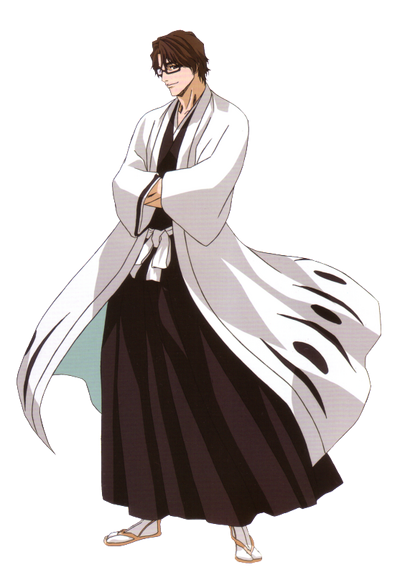 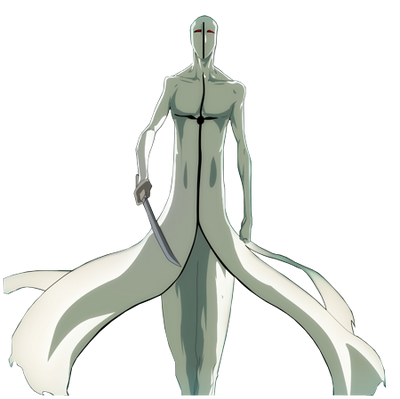 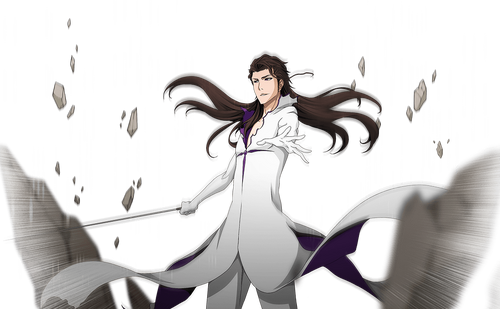 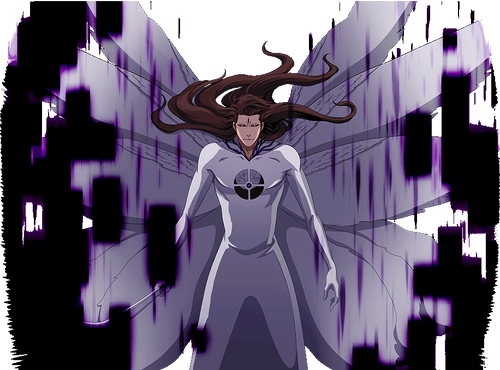 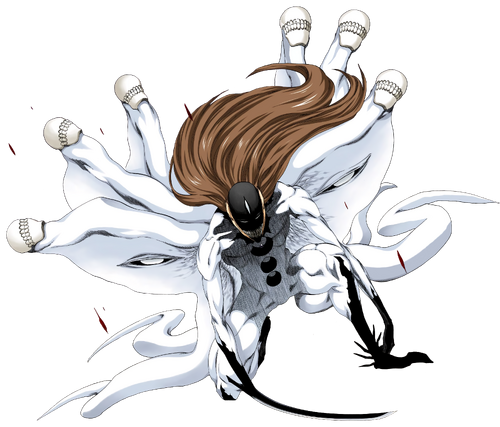 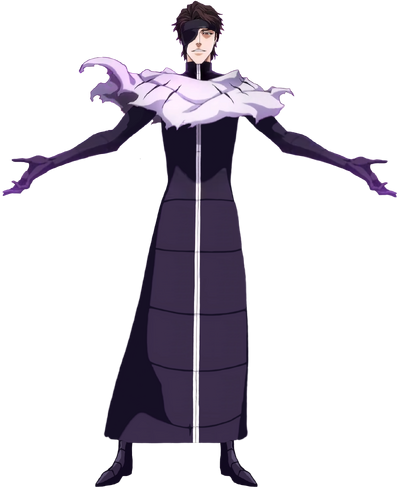 Sōsuke Aizen (藍染 惣右介, Aizen Sōsuke) is the former captain of the 5th Division in the Gotei 13. He later leaves Soul Society with his followers, Gin Ichimaru and Kaname Tōsen. His lieutenant was Momo Hinamori. He formerly served as the lieutenant of the 5th Division under Shinji Hirako. After waging war against Soul Society with an army of Arrancar, Aizen was defeated by Ichigo Kurosaki and sealed away by Kisuke Urahara, and then imprisoned for his crimes.

Superhuman Physical Characteristics, Expert Swordsmanship, Hand-to-Hand Combatant, Pseudo-flight, True flight In his Monster form, Genius Intelligence, Spiritual Awareness (Can see invisible spirits and objects), Extrasensory Perception (Able to detect Reiatsu from a different dimension), Cosmic Awareness (Able to sense and can tell what is going on in different dimensions), Longevity, Stealth Mastery (With Reiatsu-Concealing Cloak), Can take his reiryoku and exert it as reiatsu, Statistics Amplification (Can use Shunpo to boost his speed), Dimensional Travel (With Senkaimon), Electricity Manipulation (With Hadō 63), Gravity Manipulation (With Hadō 90), Energy Absorption (With Hadō 99), Energy Projection, Illusion Creation and Perception Manipulation with Kyōka Suigetsu, Transformation and Reactive Evolution with the Hogyoku, Regeneration (Low-Godly with the Hogyoku), Immortality (Types 1 and 3 with the Hogyoku), Teleportation (Can teleport short distances in his Transcendent form), Creation (By channeling his power through the Hogyoku, Aizen can turn a normal hollow into an Arrancar), Limited Reality Warping (Can making the desires of his subjects real by using the Hogyoku. Gave Orihime and Chad their powers), Probability Manipulation (Made certain events happen with the Hogyoku namely the early events that transpired between Ichigo and Rukia), Barrier Creation (Has a barrier guarding the back of his neck. Can use Bakudo 81 and El Escudo. His Reiatsu can also act as a barrier), Power Nullification (Can nullify the abilities of weaker being with his Reiatsu), BFR (Shinigami can transfer the souls of the dead to either Soul Society or Hell depending on the deeds they've committed when they were alive with their Zanpakuto), Soul Manipulation (Shinigami can directly damage souls with their Zanpakutō), Invisibility, Non-Physical Interaction (Can harm and interact with intangible spirits and objects), Overwhelming Aura (Able to subdue Grimmjow, can disintegrate weak beings just by simply being near him in post-Chrysalis forms)

Resistance to Soul Manipulation, Paralysis Inducement (NaNaNa's The Underbelly is somewhat ineffective on him as it can only immobilize him for short amount periods of times, even with most of his spiritual power is restricted and his black coat making it easier for NaNaNa's abilities to work) and Space-Time Manipulation (Was able to destroy Kōtotsu and only strayed from his course slightly. Being chased by Kōtotsu can throw someone to a different time period)

Durability: Country level | At least Country level (Survived a forbidden Kidō from Yamamoto, took a Getsuga Tenshō from Post-Resurrection Bankai Hollow Mask Ichigo) | At least Country level (Tanked multiple attacks from Isshin, Yoruichi and Urahara) | Multi-Continent level (Was able to survive a slash from Dangai Ichigo who was able to destroy a small mountain by the pressure of the slash alone), immortality and regeneration also make him hard to kill | Multi-Continent level (More durable than before. Survived Ichigo's Mugetsu due to the Hogyoku) | Large Planet level (Took attacks from Post-Power Absorption Yhwach)

Hogyoku: A powerful object originally created by Kisuke Urahara. Once equipped, Aizen is granted the ability of high-speed regeneration, and constant evolution in the form of more powerful transformations. However, should he be pushed beyond his limits, the Hogyoku would backfire on him and no longer consider him to be the true wielder of the Hogyoku.

Reiatsu Concealing Cloak: A cloak created by Urahara which hides the wearer's Reiatsu. Aizen used this cloak to sneak up and attack Isshin Shiba. Aizen states it allows the wearer to blend in with the air around them by incorporating Kidō into the cloak, almost completely concealing them from sight.

Intelligence: Extraordinary Genius. Arguably, the most fearsome trait of Aizen is his tremendous intellect. He is well-versed in the history, strategy, and tactics of Soul Society, and is privy to knowledge unknown to many, such as the existence of the Ōken, as well as the obscure method in which to create one. He has created several Hollows and Arrancar while avoiding arousing any suspicion from the majority of his fellow Shinigami. For over 110 years, he had been engaging in experiments which involved unique and highly dangerous manipulations of Reiryoku and Reishi, including experiments involving the Hollowfication of Shinigami, something which had never been done before. He has an innate knowledge of the Hōgyoku, rivaling that of its creator, Kisuke Urahara; he even knows how to destroy it. He figured out the true nature of Shinji Hirako's Shikai and deduced it produces an optical illusion, allowing him to counter its effect. He effectively deduces the true nature of the Hōgyoku via trial and error of the situations which revolve around it. He was also aware of several events, which happened in separate dimensions, as he knew about Ichigo fighting and winning against Grimmjow and Ulquiorra, while simultaneously awakening a "new power", despite being in the Real World with the Espada at that time.

Weaknesses: His Zanpakutō's special ability can be overcome by touching its blade before it is released, and he is somewhat overconfident. He can only use his Reality Warping when possessing the Hogyoku. 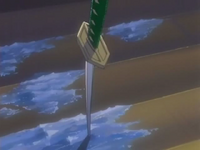 Shikai: The initial release to a Shinigami's Zanpakutō. It is activated by a command while declaring the name of the Zanpakutō Spirit. It changes the shape of the Zanpakutō and/or granting special abilities. Aizen's Shikai is Kyouka Suigetsu, released on the command "Shatter".

Bankai: The ultimate and final release to a Zanpakutō. The difference in power between Shikai and Bankai is generally around 5-10 times more powerful. Even though Bankai is the final stage of a Zanpakutō, it does not mean the Shinigami's growth ends there. A Bankai, especially one recently obtained, can evolve even further as its Shinigami gets stronger. Aizen's Bankai is unknown.

Fragor: Aizen concentrates a large amount of Reishi into one of his wings and fires it upon his foe for a massive AOE strike.

Kidō: Spells cast by Shinigami with strong enough Reiryoku and Reiryoku control. Kidō is divided into mainly three categories: Hadō for attacks, Bakudō for battle support and Kaidō for healing. The spells are ranking from 1-99 with 1 being the weaker and easier spells to cast and 99 being the most powerful and difficult to cast. Skilled users can cast Kidō without the need of an incantation; however, casting without incantation does reduce the Kidō's effectiveness less than a third of its full potential.