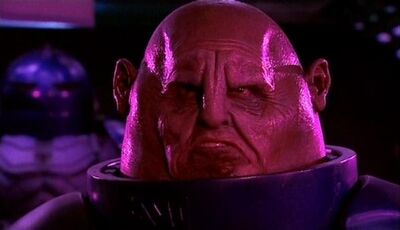 The Sontarans were a race of aggressive and militaristic clones from the planet Sontar. Honourable in nature, Sontarans consider death in battle to be a glorious end in what ends up being a short life. Among the notable Sonotarans is Strax, a veteran Sontaran of 12 years who is currently living in Victorian London as a butler/footman to Madam Vastra.

Kardashev Level: Between Type 0 and Type II (Can manipulate the entire orbit of their own Solar System to place their homeworld as the central body, around which the other celestial bodies revolve. However, their true source of power is unknown, but implied to be further along than the Humanity in the 21st century)

Age: Varies (According to multiple accounts, the Sontaran-Rutan War has lasted tens of thousands of years before early human history, if not millions. The lifespan of individual Sontarans is unknown, but Strax indicated very few live past ten due to their nature as a warrior race)

Population: Billions (During their war with the Rutans, the Sontarans lost billions of soldiers on their side, which should be far surpassed by their total population. A single cloning batch produces millions upon millions of soldiers, and clone planets can produce billions)

Attack Potency: Small Building level (Far stronger than the Time Lords and hail from a world with significantly higher gravity; one soldier knocked out a Judoon Soldier, who are physically comparable to Ogrons and served as their direct rivals in the past. Sontaran blasters can vaporize Banes, who are far larger and more robust than humans, and destroy walls) | Multi-Continent level (Sontaran cannons can produce ten billion megatons of nuclear fire. Later into their war with the Rutans, both sides could destroy small planetoids and devastate planets by self-destructing) to Planet level (Mere battle spheres contain enough armament to reduce planets to "less than dust", eschatomic warheads can destroy planets. According to The Doctor, Staal's flagship could "blast [the Earth] out of the sky"), possibly Solar System level (Rearranged their solar system to make their homeworld its central body. Their war with the Rutans has obliterated whole star systems)

Industrial Capacity: A single cloning facility can produce up to a million Sontarans in four minutes, and a single planet contains hundreds, if not thousands of factories, which is substantiated by The Doctor's claim that an Earth-sized planet could create billions of clones. Seemingly produce enough weapons and ships to keep up with their enormous population of Sontarans, in addition to their war-effort against the Rutans.

Military Prowess: The Sontarans are a military-based civilization, who are at almost constant war with the Rutans for thousands, if not millions of years. According to Linx, the Sontaran Military Academy have hatchings of a million cadets at each muster parade, allowing them to sustain enormous casualties on all battle fronts. Fleets are capable of performing extremely complex manoeuvres, and even 4-D pincer movements in conjunction with the Rutans.

Weaknesses: Probic vent at the back can stun/knock out a Sontaran if it’s with a blunt object or kill with a sharp object.

Start a Discussion Discussions about Sontaran (Doctor Who)