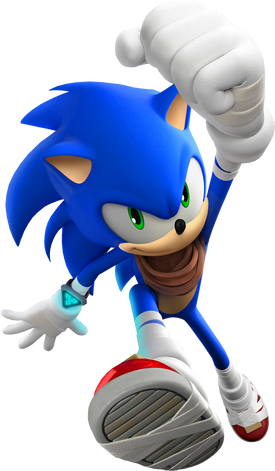 Sonic the Hedgehog is the main protagonist of the Sonic Boom series. He is an anthropomorphic hedgehog gifted with super speed, who fights Dr. Eggman and other forces of evil alongside his group of friends as the leader of Team Sonic to preserve peace and freedom.

Origin: Sonic the Hedgehog (The Universe)

Attack Potency: Town level (Should be comparable to Knuckles who can destroy asteroids), can ignore conventional durability to an extent via Ice Manipulation (Makes enemies brittle enough to shatter)

Durability: Town level (Took beatings from robots that are stronger than Knuckles), higher with force-fields and Aura

Range: Standard melee range, Hundreds of meters with his abilities

Standard Equipment: His wrist Communicator which enables Fire/Ice Mode and can generate his Enerbeam. Can also carry and use several other weapons, gadgets, and vehicles.

Intelligence: Average, with Above Average Combat/Tactical intelligence (Is capable of coming up with new strategies on the fly and quickly adapting to different situations. During combat, Sonic exercises great kineticism and power, blitzing foes with a rapid series of techniques intended for high-speed offense and defense to take them down as swiftly as possible).

Start a Discussion Discussions about Sonic the Hedgehog (Sonic Boom)