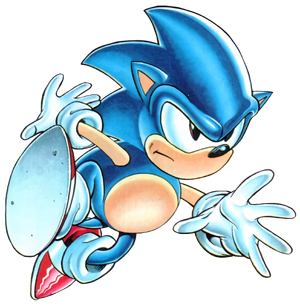 Sonic the Hedgehog is the hero of the titular comic, he is an adaptation of the game character of the same name.

Originally a normal brown hedgehog and resident of the Green Hill Zone, Sonic accidentally discovered the lab of a benevolent scientist Doctor Ovi Kintobor. Kintobor gave to Sonic the "Power Sneakers", and when they planned on testing it, Sonic ran so fast that he broke the sound barrier and his quills fused together and became blue.

Upon Kintobor's transformation into Dr. Robotnik, Sonic used his speed to battle against the madman's attempts at conquering Mobius.

Age: Likely in his teens

Same as before but on a much higher scale, Self-Sustenance (Types 1 and 3), Flight, Spaceflight, Invulnerability, Regeneration (Low-Mid), Aura, Resistance to Extreme Cold and Cosmic Radiations

Attack Potency: City level+ (Cancelled out a missile's explosion that was going to destroy a whole city. Casually kicked a Monitor out of orbit and produced 51.7 Megatons of force. Often pulls his punches, as shown when his identical self overpowered him due to having a killer instinct despite them being physically equal. Can fight Knuckles) | At least City level+ (Is powered by the incomplete Chaos Emeralds. Can casually defeat beings that Sonic struggled in vain to defeat. Decapitated Metallix Mark 2 with a single punch. Easily overwhelmed Brutus and tore off one of his arms with one punch. Destroyed a robot that was giving Sonic trouble with ease) | Low Multiverse level (Is powered with the complete emeralds like God Robotnik and Perfect Chaos are, Sonic stated he could destroy the Special Zone. Was stated by Word of God to be the strongest being in the comic)

Speed: Sub-Relativistic+ (Crossed half of the world and dodged a laser) | At least Sub-Relativistic+ (Much faster than his base form) | Massively FTL+ (Flew from a distant asteroid to were Mobius was in minutes, he was lightyears away)

Lifting Strength: Class 100 (Flipped a tank over, should be stronger than Tails who destroyed a tank with a single blow) | At least Class 100 (Much stronger than his base form) | Class Y (Scales to God Robotnik, pushed the moon with ease)

Stamina: Extremely high | Limitless (He spent months transformed while inside the Omni-Viewer, and when he got out he was fresh) | Limitless

Standard Equipment: Nothing notable other than his Power Sneakers and very rarely the Chaos Emeralds.

Intelligence: Average | Below Average (He is very simple-minded when angry) | Average

Weaknesses: Sonic will mostly control himself so he doesn't turn into Super Sonic (Albeit he will do it if the situation is dire enough to require to transform into Super Sonic), he is also very cocky | Weak to mind control | Same as before, Is very arrogant and sadistic, often holding back to prolong his opponent suffering, Will die if drained of all his Chaos Energy

Retrieved from "https://vsbattles.fandom.com/wiki/Sonic_the_Hedgehog_(Sonic:_The_Comic)?oldid=6998960"
Community content is available under CC-BY-SA unless otherwise noted.