Sonic the Hedgehog is the main protagonist in the 2020 self-titled CGI/live-action film developed by Paramount Films. He is an anthropomorphic blue hedgehog who lived at Green Hill Zone as a child, but had to leave due to the echidna's wanting his power. He eventually hides on Earth for years until he causes everyone's power in the entire Pacific Northwest to go out. He must then go to San Francisco with his new friend Tom Watchowski, a small town sheriff, to get his rings back and hide once again, determined to save the planet from the evil Dr. Robotnik.

Tier: 9-B, 8-A with electricity, possibly far higher

Powers and Abilities: Superhuman Physical Characteristics, Small Size (Type 0), Acrobatics, Superhuman Speed, Electricity Manipulation (Can harness electrical energy, which courses through his quills. An individual quill can provide a large shock. Can also generate electrical blasts), Air Manipulation, Healing, Portal Creation and BFR via Rings (His rings can create portals to other planets, and trapped Robotnik on a planet filled with mushrooms), Shockwave Manipulation (Can cause sonic booms while running), Afterimage Creation

Speed: Sub-Relativistic (At a young age, Sonic claimed he could cross his home island in two seconds. Ran from Green Hill, to the Pacific Ocean, then back in a matter of two to three seconds. Viewed several bullets and missiles fired at a stand still)

Durability: Wall level (Survived small explosions that were in close proximity to him. Withstood a laser blast from Robotnik that caused an explosion, but was knocked out for a few seconds. Survived a fall from the Transamerica Pyramid. Should be comparable to his attack potency)

Stamina: High (Can run long distances without getting tired)

Range: Standard melee range normally. Several meters with electrical blasts, Planetary via shockwaves (Created an electric shockwave that reached our satellite). Universal via rings (It is stated that Earth was on “the far side of the universe")

Intelligence: Average (Sonic was depicted as having the mind of a hyperactive, easily distracted teenager. Despite this, Sonic displayed impressive control over his super speed, having demonstrated flawless coordination, equilibrium and dexterity. He can change direction with immediate sharp turns and come to a screeching halt on the spot, as well as being able to engage in combat with Doctor Robotnik‘s vehicles, deftly weaving around his numerous projectiles and overwhelming him with a series of momentum-fueled strikes)

Weaknesses: Can act a bit cocky. Can lose focus of deadly objects and danger careening towards him. 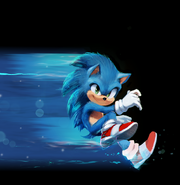 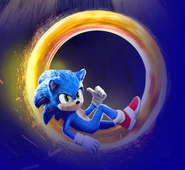 Sonic with a ring
Add a photo to this gallery

Sans (Undertale) Sans' Profile (Speed was equalized, 9-B Sonic was used, the battle took place at the Last Corridor and Sonic was bloodlusted)

Start a Discussion Discussions about Sonic the Hedgehog (Paramount)