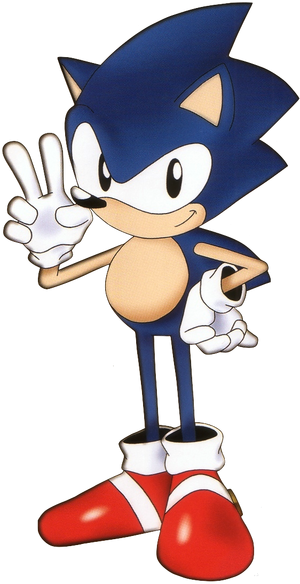 Sonic the Hedgehog is a two-episode 1996 Japanese anime OVA series based on Sega's best-selling franchise Sonic the Hedgehog. The anime features Sonic, Tails, Knuckles, Dr. Eggman (Dr. Robotnik in the English release) and a few supporting characters, such as the human Sara. The series was licensed by ADV Films and was released on September 7, 1999, as a single direct-to-video film in North America as Sonic the Hedgehog: The Movie.

Attack Potency: Mountain level (In his fight against Hyper Metal Sonic both accidentally made a mountain fall down)

Speed: Massively Hypersonic (At least low triple digits, ran from a side of the planet to the other one in a few minutes)

Durability: Mountain level (Survived the explosion that made a mountain fall down)

Intelligence: Above Average. Is very skilled in close quarters combat, using his immense speed and agility to gracefully swerve around incoming attacks and strike opponents with momentum-fueled strikes. Acting as one of the defenders of Planet Freedom, Sonic has experience thwarting Dr. Robotnik countless times, a skilled genius.

Start a Discussion Discussions about Sonic the Hedgehog (OVA)