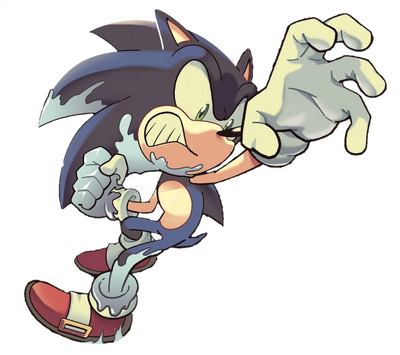 Sonic the Hedgehog is the main and titular protagonist of the Sonic the Hedgehog comic series published by IDW Publishing. An anthropomorphic hedgehog gifted with super speed, Sonic uses his abilities to protect the world from anyone who poses a threat, namely Dr. Eggman. After Sonic and his allies defeated Dr. Eggman and liberated the world from his Eggman Empire, the evil doctor went missing. However, his Badniks remained. Initially directionless, these robots eventually began launching coordinated attacks on villages, suggesting someone had taken control of them. Sonic thus begins travelling from town to town to stop the Badniks, receiving help from both old friends and new allies along the way.

Superhuman Physical Characteristics, 4th Wall Awareness, Acrobatics (Like his game counterpart, he constantly shows great agility, dexterity, equilibrium and coordination. Regularly performs hypermobile movements with his body, such as when he uses his Spin Attack or Homing Attack. Capable of running along many surfaces, whether along structures or over water. Able to utilize additional mid-air jumps), Body Control (Can sharpen his spines to perform spin attacks), Natural Weaponry (Through sharpening his spines), Homing Attack, Defensive Aura (Similar to his game counterpart, Sonic's boost technique creates a shield-like aura which allows him to ram into enemies and obstacles with no repercussions), Weapon Proficiency (Can take and use weapons), Air Manipulation (Can produce whirlwinds with his speed to blow away enemies), Vehicular Mastery, Speed-Based Combat Skills, Shockwave Generation (Can blow opponents off their feet), Technological Flight (Via Extreme Gear), Accelerated Development (Passive; Physical Stats, Abilities. It's heavily implied that the events of the games took place within the IDW comics, where his game counterpart displays such abilities. Grew stronger after six months of imprisonment, which is referenced as well), Acausality (Type 1), Resistance to Existence Erasure (Sonic has been shown previously facing off against the Time Eater after it erased history and left the world as a void, in which Sonic was unaffected by), Mind Manipulation and Possession (The events of Sonic Unleashed were implied to have happened, where he effortlessly resisted such effects from Dark Gaia), Transmutation, Biological Manipulation and Disease Manipulation (Can fight off the effects of the Metal Virus but cannot outright ignore it, which has been shown to affect people and plant life) and Freezing Temperatures (Indifferent to traversing and fighting in snowy areas)

All abilities from base, Disease Manipulation, Biological Manipulation, and Transmutation (Carries the Metal Virus, which can infect living organisms with a single touch and turn them into mindless Zombots. The infection also spreads faster when repeated contact is made)

Lifting Strength: Class 5 (Equal to Tangle the Lemur. Should be comparable or superior to Espio, restrain Vector, who can easily lift cars) | Class 5

Intelligence: Likely Gifted (Shown to have experiences similar to his game counterpart)

Weaknesses: Unknown | If Sonic isn't continuously on the move, he will succumb to the Metal Virus. The Metal Virus cannot infect beings made of metal or other non-living material.

Note: It's likely that Sonic is far stronger than his depiction of his current feats, since the series is still currently very young and he has ended every fight thus far with little effort.

Start a Discussion Discussions about Sonic the Hedgehog (IDW)