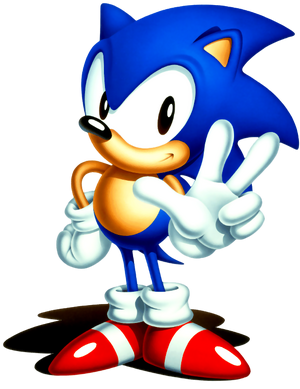 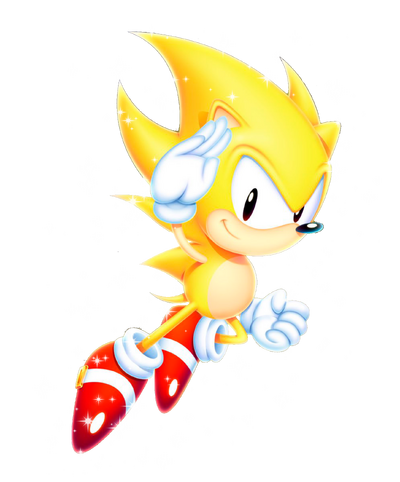 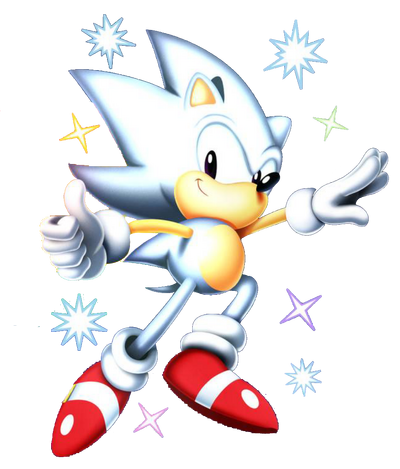 Sonic the Hedgehog is the titular character and main protagonist of the Sonic the Hedgehog series and Sega's mascot. He is an anthropomorphic hedgehog gifted with the ability to run at the speed of sound and beyond, hence his name, and possesses lightning-fast reflexes to match. As his species implies, Sonic can also roll up into a concussive ball, primarily to attack enemies.

Superhuman Physical Characteristics, Superhuman Speed, Self-Sustenance (Type 1), Acausality (Type 1), Fourth Wall Awareness, Non-Physical Interaction (Can tag the Hyudoros and Boos with normal attacks), Indomitable Will, Expert Hand-to-Hand Combatant, Vehicular Mastery, Hammerspace, Acrobatics (Boasts incredible leaping capabilities and profound acrobatic skills and agility, along with enhanced reflexes that let him avoid any incoming obstacles and attacks with precise and delicate movements. Is capable of running along vertical surfaces, ceilings, and even treading across water. His fighting style focuses on evasion and momentum-fueled strikes), Regeneration (Mid. Can survive being crushed flat), Natural Weaponry and Body Control (Can sharpen his spines and curl into a ball to perform his Spin Attacks, being capable of slashing through solid metal like tissue paper), Homing Attack, Surface Scaling (By running along walls and other structures), Water Walking (With his speed), Forcefield Negation (Sonic's Insta-Shield is capable of bypassing forcefields to hit his opponent) Speed Augmentation (With Boost and Super Peel Out), Momentum Manipulation (When performing the Drop Dash, Sonic stores up momentum before releasing it all in one instant to propel himself in a specific direction), Aura (While using his Boost technique, Sonic surrounds himself in a protective aura that allows him to barrel through enemies and obstacles with no repercussions), Forcefield Creation (Of Energy, Fire, Water, and Electricity varieties), Limited Spatial Manipulation (With their speed alone, Modern and Classic Sonic can "fix space" with their speed), Time Manipulation (Time Break, he can slow down time to a near stop), Transmutation (Can turn nearby enemies into Rings with Ring Time), Invulnerability (With the Invincibility Monitor), Enhanced Senses (With Trausure Scanner), Statistics Amplification (With Speed Shoes and Hercules Muscles), Flight (With Rocket Shoes), Underwater Breathing (Type 2 with the Aqua Shield), Ice Manipulation (With Ice Boost), Time Travel (With Time Stones), With Color Powers: Transformation, Fire Manipulation and Explosion Manipulation (With Red Burst and Black Bomb), Vibration Manipulation (With Blue Cube and Gray Quake), Electricity Manipulation (With Ivory Lightning), Black Hole Creation and Gravity Manipulation (With Violet Void and Indigo Asteroid), Intangibility (With Violet Void), Deconstruction and Transmutation (With Indigo Asteroid), Surface Scaling (With Pink Spikes and Gray Quake), Absorption and Size Manipulation (With Purple Frenzy and Violet Void), Flight and Levitation (With Crimson Eagle, Green Hover, Indigo Asteroid, Magenta Rhythm, Orange Rocket, and Violet Void), Resistance to Extreme Cold, Cosmic Radiations (Unaffected by the environment of space), Existence Erasure (Unaffected by the Time Eater erasing history and leaving everything as a colorless void, whereas everybody else had to be restored), Poisons and Chemical Products (Can travel through the most dangerous areas of Chemical Plant Zone without any trouble)

All previous abilities are enhanced even further, Afterimage Creation (Enhanced from before, as he has several constant afterimages trailing him) and Light Manipulation (Can produce omnidirectional, blinding flashes of light that damage or destroy all enemies within range), Underwater Breathing (Type 2) (Can survive underwater indefinitely without needing to use air bubbles or Water Shield)

Attack Potency: Planet level+ (Defeated a weaponized Egg Mobile as well as Silver Sonic, both of which were powered by a Chaos Emerald, which can shift a continent and split the planet. Fought and defeated each of his rivals during Sonic the Fighters, each of who were in possession of a Chaos Emerald) | Multi-Solar System level (Should be superior to the Final Egg Blaster) to Universe level+ (Stomped the Time Eater alongside his Modern counterpart. Brought down the Phantom King), potentially Low Multiverse level (Can potentially use the full power of the Chaos Emeralds, which allowed Super Sonic, Super Shadow and Super Silver to match Solaris) | At least Low Multiverse level (Vastly above Super Sonic and comparable to Hyper Knuckles)

Speed: FTL (Can react to and outspeed lasers) Faster with Boost, Color Powers, and the Super Peel Out | Massively FTL+ (Far faster than his base form. Should be comparable to Modern Super Sonic as they share the same power source. Kept up with the Time Eater), potentially Immeasurable (Comparable to full power Super Sonic who managed to hit Solaris before the latter could react). Higher with Super Sonic Boost | Immeasurable (Should be far faster than before)

Lifting Strength: Class 10 (Can push rocks larger than him) | Pre-Stellar (Superior to the Hyper-Go-On energy that the Wisps use) to Unknown, potentially Immeasurable (Comparable to Super Shadow, who can push back Solaris) | Immeasurable (Far stronger than Super Sonic)

Stamina: Very high (Sonic possesses an indomitable force of will; in situations where most others would give up and where he is severely outnumbered and outgunned, Sonic never loses faith in himself and never surrenders.) Limitless as Super Sonic and Hyper Sonic

Intelligence: Though less experienced than his Modern counterpart, Classic Sonic is an exceptionally skilled combatant in his own right. Much like his Modern counterpart, he has saved the world almost single-handedly on a number of occasions. He has foiled every one of Dr. Robotnik's plots, overwhelming his foes with his sheer speed and a myriad of derivative techniques that allow him to casually plow through armies of robots designed to pillage entire countries. Sonic has profound acrobatic skills and agility, along with enhanced reflexes that let him avoid any incoming obstacles with precise and delicate movements

Weaknesses: He cannot use many abilities showcased by his Modern counterpart and has trouble in aquatic areas due to his inability to swim

Start a Discussion Discussions about Sonic the Hedgehog (Classic)