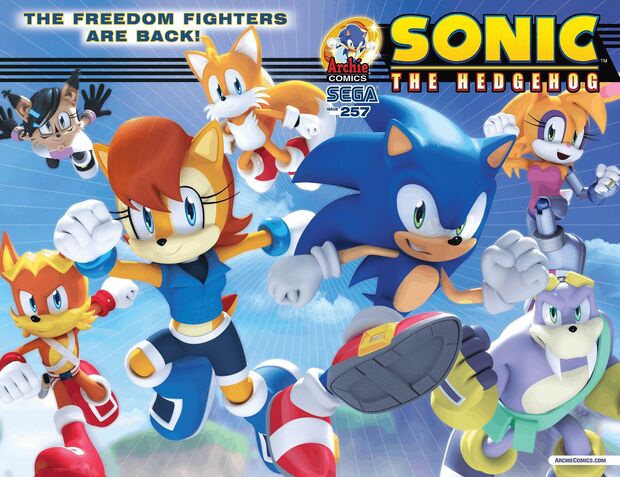 For detailed information about this series, visit the Mobius Encyclopaedia.

Inspired, the Archie Sonic Comics are based on Sega's video game franchise of the same name. The Comics takes the video game characters, who lacked a clear personality at the time, and explore their character in ways the source material couldn’t.

The comic's main focus is the adventure stories of the title character, the world-famous hero Sonic the Hedgehog. Sonic loves adventure and chili dogs and he is always willing to fight to protect the ones he cares about from any threat. Sonic is in some ways different from his game counterpart - in the comics, he is displayed as having a rather strong sense of humor, as well as important familial ties with his family and friends; characteristics absent from most other incarnations. He is shown engaging in romantic relationships, while in the games, he is uninterested in romance. He is also portrayed as having a deeper sense of duty - in the games Sonic treats his ongoing conflict with Eggman as just an opportunity to have a fun time, whereas in the comic series he understands it as a responsibility to protect his world from a terrible menace, although he does seem to have fun when fighting Eggman.

While the Verse's setting takes heavily in Sonic SATAM's setting, Archie started releasing it's issues almost a year before SATAM started airing, making Sally and the other Freedom Fighters predating the show as Comic Book Characters.

Archie Sonic has stories that surround other characters from the games such as Knuckles the Echidna and Shadow the Hedgehog, the former having a much bigger background and latter having many of his own adventures.

However this no longer matters as of the Worlds Collide event, the Universe has been reset with the new universe being more in line with the games.

Archie Sonicverse's power is way above the Game Canon of Sonic in both destructive capacity and hax. The Pre-Super Genesis Wave has certain characters capable of controlling a power called "Chaos Force" which is a tool for warping reality when used by top tiers in which ripping atoms from the body, changing reality, and distorting space and time are common place with mastery. Weaponry that is easily capable of changing and destroying reality on a whim. Characters capable of moving at MFTL+ speeds, and with the capacity to destroy planets, stars, and even solar systems with little effort. The Chaos Force is also believed to be the 4th dimension where the top tier characters have been or resided there.

The entire verse for the Mobians naturally all have resistance to Extreme Cold and Cosmic Radiation from scaling to the Freedom Fighters, who are all written as regular Mobians (biologically) without special enhancements.

The verse has just reset itself as of the World's Collide Arc ending entering the Post Genesis Wave Reboot, thus Chaos Force is gone, and all characters and elements tied to Ken Penders have been taken out of the comic. The verse still remains incredibly strong, especially characters' Super Forms.

Characters taken from different continuities or different comics but are all still under the Archie Comics lore.

First Cover May/2011
Add a photo to this gallery

Retrieved from "https://vsbattles.fandom.com/wiki/Sonic_the_Hedgehog_(Archie_Universe)?oldid=7032097"
Community content is available under CC-BY-SA unless otherwise noted.