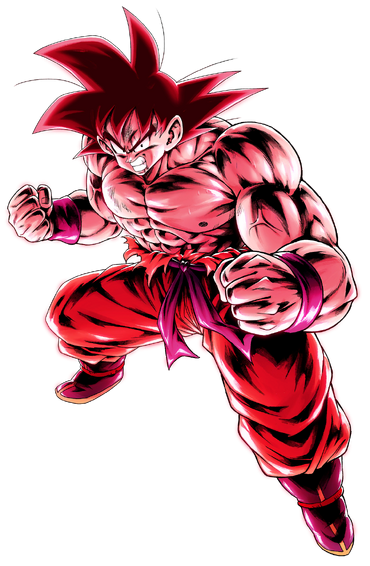 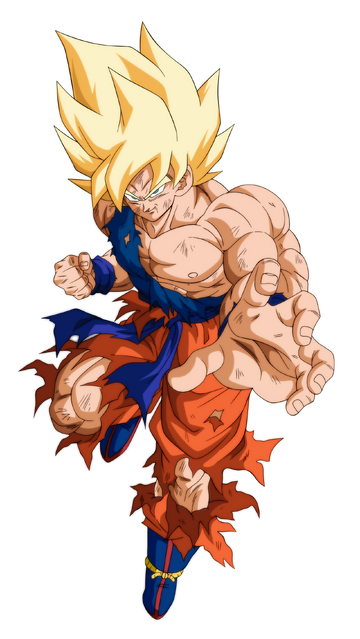 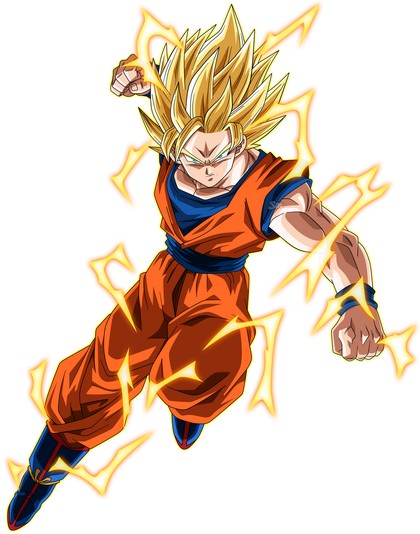 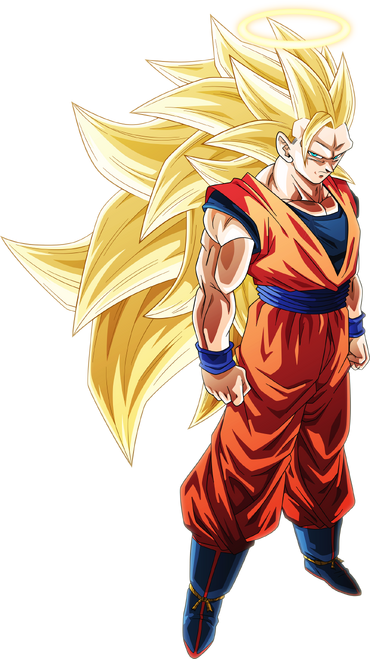 Son Goku is the main protagonist of the Dragon Ball metaseries. A Saiyan, sent to Earth as a baby with the mission to destroy it, Goku became a kind-hearted boy after he bumped his head and was adopted by Grandpa Gohan. Years after his early adventures, after he has married Chi-Chi and settled down with their son, Goku learns of his alien heritage from his elder brother, Raditz, and goes on to face many opponents in his defense of Earth and his friends.

Powers and Abilities: Master Martial Artist, Superhuman Physical Characteristics, Ki Manipulation (Can be used defensively and offensively, to strengthen his skin or to fire ki blasts, which can home in on targets, and form defensive barriers), Ki Sensing (Can locate others by reading their ki, detect malicious intent, difference in power levels, and beings in different dimensions), Enhanced Senses (Even without ki training, Goku has exceptional senses that allow him to locate small, distant objects by tracking their smell, see clearly over long distances, and track the movements of others even in pitch black conditions by feeling vibrations in the air), Analytical Prediction, Acrobatics, Pressure Point Strikes, Flight, Accelerated Development (Training; Physical Stats, Abilities), Reactive Power Level (As a Saiyan, Goku grows stronger every time he fights and can become stronger in the midst of combat, vastly increasing in strength whenever he is mortally injured), Afterimage Creation, Power Mimicry (Can easily replicate other Ki-based techniques after seeing them once), Light Manipulation (Can create flashes of light to blind opponents and Super Saiyan forms can glow in pitch-black conditions), Telepathy (Can telepathically communicate with others and read minds), Shockwaves Generation, Teleportation, Dimensional Travel, BFR, Rage Power (Triggered the Super Saiyan transformation through rage), Statistics Amplification (Goku can greatly enhance his capabilities with Kaio-ken, by potentially up to twenty times), High Pain Tolerance, Transformation (Can transform into a Super Saiyan, increasing his capabilities drastically), Limited Social Influencing (When he fought Kid Buu, he was able to convinced people across Universe 7 to give him his energy to perform the Spirit Bomb. Although, it is unknown if everyone did give out their energy), Adapted to 100 times Earth's gravity via the Gravity Machine, Fusionism (Via Fusion Dance), Resistance to Cold, Radiations, Poison, Paralysis (Managed to get out of Frieza's Imprisonment Ball at the last moment), and Harsh Temperatures (Survived and trained extensively for at least a year within the Hyperbolic Time Chamber, which has temperatures that range from -40°F to 248°F)

Attack Potency: At least Moon level (Fought Raditz alongside Piccolo). Small Planet level after King Kai's training (Easily humiliated Nappa before he calmed down), Planet level with Kaio-ken (Overpowered Vegeta with Kaio-ken x3, and then matched his Galick Gun with a Kamehameha, overwhelming him when he went Kaio-ken x4) | At least Planet level (Easily defeated Recoome, Burter, and Jeice), higher with Kaio-ken (Surpassed Ginyu in power, leading to him stealing his body). At least Dwarf Star level post-Zenkai (Stronger than Vegeta and Piccolo, and fought against a very casual Frieza in his final form), Small Star level with Kaio-ken x10 and x20 (Bruised Frieza in his final form) and the Spirit Bomb (Badly injured Frieza). Small Star level+ as a Super Saiyan (Matched Frieza's full power and ultimately defeated him) | At least Dwarf Star level, Star level as a Super Saiyan (Much stronger than he was previously, easily blocked Trunks' slashes with his finger before becoming stronger for the confrontation with the androids). Star level, at least Large Star level as a Full Power Super Saiyan (Fought against Perfect Cell and nearly killed him with his Instant Kamehameha, though Cell wasn't fighting at full power) | Star level, Large Star level+ as a Full Power Super Saiyan (Threatened to kill Shin, who can create various celestial bodies), Solar System level as a Super Saiyan 2 and 3 (Superior to Cell Saga Gohan as a Super Saiyan 2, matched Majin Vegeta, and easily overpowered Innocent Buu as a Super Saiyan 3. He said that he could have defeated Kid Buu if he finished the fight quickly)

Stamina: Very high. Goku can train for days with minimal rest and can fight through his long, arduous fights with the likes of Vegeta and Frieza, continuing to fight against Vegeta even after overexerting himself with Kaio-ken x4, and ultimately outlasting the latter even after being effortlessly beaten around, pushing himself to his limits with Kaio-ken, and exhausting himself with his Spirit Bomb. When he was younger, he managed to pull through and defeat Piccolo even after all of his limbs were broken and he was mortally injured. However, his stamina drops greatly as a Super Saiyan 3, which he can only maintain for a couple of minutes, making it effectively useless against opponents on his level

Intelligence: While he lacks knowledge when it comes to things that aren't related to fighting, Goku is a master of prodigal skill when it comes to martial arts, with years of experience fighting against powerful opponents with a plethora of abilities. His skill when it comes to combat and the usage of ki allows him to replicate other ki-based techniques after seeing them once, and he was the first to realize how much energy the Super Saiyan transformations unnecessarily drained. Despite this drawback, he was the first to master the Super Saiyan state, making it highly efficient. He is a genius in combat and is capable of devising new applications of his techniques on the fly, such as using Kamehameha with his feet

Weaknesses: Goku seeks strong opponents and therefore will allow his opponents to reach their full power for the sake of a good fight. Kaio-ken strains his body, causing him intense pain and exhaustion if he overuses it. He often drops his guard and leaves openings for his opponents whenever he gets distracted, lowering his durability. His Spirit Bomb requires a long charge-up period, during which time he is vulnerable. He cannot survive in the vacuum of space and needs to locate a ki signature to teleport using Instant Transmission. Super Saiyan 3 drains his ki rapidly and will exhaust him within only a few minutes

Martial Arts: Goku is a master martial artist who has learned from many of his universe's greatest teachers, from his adoptive grandfather, Grandpa Gohan, Master Roshi, Korin, Kami, and even King Kai.

Notes: This profile strictly uses the original manga for scaling the characters. Please don't try to use feats or statements from Dragon Ball Kai to upgrade them, as Kai contains contradictions to the source material.

Vorago (RuneScape) Vorago's Profile (This was Saiyan Saga Goku and Vorago was 5-B. Speed was equalized)

Ditto (Pokémon) Ditto's Profile (This was Saiyan Saga Goku, Ditto was given time to transform, and speed was equalized)

Khârn the Betrayer (Warhammer 40,000) Khârn's Profile (4-B versions were used. Speed was equalized)

Retrieved from "https://vsbattles.fandom.com/wiki/Son_Goku_(Dragon_Ball_Z)?oldid=7016037"
Community content is available under CC-BY-SA unless otherwise noted.